At the Magic Barn, Johnny Delaware’s The Artisanals record on the same gear that birthed Bowie’s ‘Blackstar’ 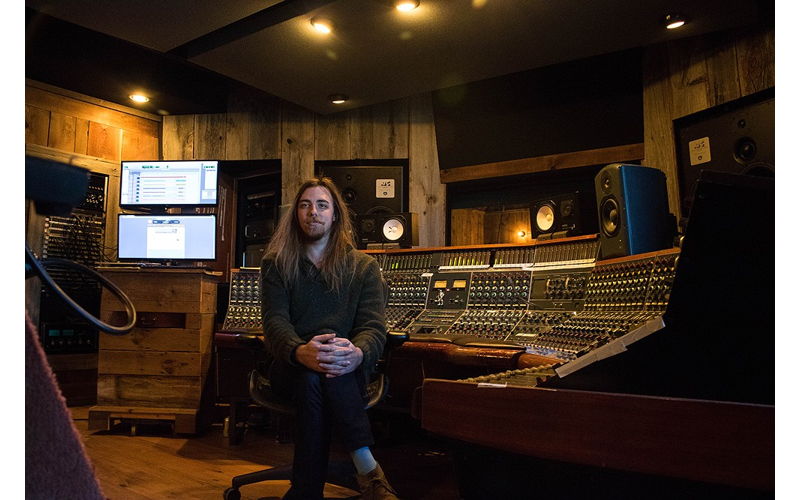 Despite what the Artisanals have already accomplished, you probably haven’t heard of them yet. After all, they’ve only played three shows, ever.

But the brand new local act — comprised of Johnny Delaware, Clay Houle, Jordan Hicks, Steven Walker, and, for now, Wolfgang Zimmerman — opened up for Band of Horses in Washington D.C. this past New Year’s Eve. It was their very first booking. And as I write this, the band is holed up recording what will be the first ever LP to come out of the Magic Barn — a studio-converted barn in middle-of-nowhere Iowa that recently acquired the board and gear from New York City’s storied, now-defunct Magic Shop Studio. That’s kind of a big deal.

Open from 1988 until March of last year, the Magic Shop was a sought-after studio beloved by countless legends, like Lou Reed and Blondie, for its vintage gear. Arcade Fire tracked The Suburbs there, and David Bowie recorded his last two albums, including Blackstar, at the Soho spot — on the very console Delaware and company are crafting their debut, Literally, Anywhere.

So how did Delaware go from being in SUSTO a few months ago to breathing down the same mic as the late, great Starman? Let’s back up a little.

Delaware’s departure from SUSTO was in the cards for half a year before his last gig with the band at the Royal American on Tues. Nov. 8, election night. “For the past three years, I’ve been going off just a feeling. And I just kinda had that feeling like it was time to move on,” he says, “which is really kinda stupid to most people, because SUSTO is becoming a very successful band. And I’m thrilled for that — I want them to blow up; I want them to succeed, because we all worked so hard on that record together. I don’t know — it was a feeling I had, and I had to move on, and it might look really dumb to people but it’s just something I had to do.”

An accomplished singer and songwriter in his own right (see the 2015 City Paper Music Awards), Delaware had been, when possible, writing his own music despite his SUSTO commitments. This is evidenced in releases like “Angel 42,” a single off last year’s SceneSC Sampler that you’ll see again on Literally, Anywhere. But for a while, he was compelled to put SUSTO first. “This revelation came over me that you kind of need to be a part of something with other people and help other people get to where they want to be,” he says. “And that’s kinda what life is about — it’s not all about you.”

In a way, Delaware’s new project had been in the works all along, unbeknownst to him. In-between SUSTO tours, he’d record any recently written songs with Brave Baby drummer and producer, Zimmerman (currently sitting in as the Artisanals’ temporary drummer), and Houle, who Delaware had crossed paths with multiple times while on the tour circuit. Houle eventually relocated to Charleston from Atlanta last year. “The whole time, I didn’t know what was going on,” Delaware says. “For my own joy, I just had to record my own songs.”

It was through a mutual friend, Daytrotter founder Sean Moeller, that Delaware was introduced to Magic Barn owner Steve McIntosh. “He brought us to the Magic Barn a couple of hours away from where Sean lives, and we ended up hanging out and I saw the studio and I got the story on the studio and I was just completely blown away that this place, this board with this musical history, is now in the middle of Iowa — and no one even knows about it,” Delaware says. “I was trying to pay attention to the signs that the universe was giving me. It was so weird, like why am I here? This is so synchronous; it’s gotta mean something.”

So Delaware recruited more players, Brave Baby’s Hicks and Walker, and together they got their “ducks in a row” and figured out how to record with some of the most prized recording gear in the world. The result? Exactly what a Johnny Delaware band should sound like — a rock band, straight up with a twist of Traveling Wilburys and Tom Petty, a sometimes orchestral, Jeff Lynn-like production. “It’s everything we’ve been chasing that we couldn’t get with computer interfaces, so it’s just been unreal,” he says. “This stuff sounds like it’s coming from the ’70s, and it’s like, yeah, well duh: it’s a 1970s Neve console. And now that we’re in front of this gear, it’s still setting in — like when we turn a dial, it’s like, ‘Wow, Lou Reed turned that dial and Patti Smith turned that dial.’ It’s odd. It’s mystical — you just don’t know why you’re here. It’s very weird, it’s strange, but we’re not gonna complain.”

The Artisanals are also producing and mastering their own tracks and have tuned down some songs to the frequency of the universe: 432 Hz. And the album utilizes everything from a gong, organ, piano, sitar, French horn, trombone, tuba, bassoon, timpani, and swarmandal to the University of Iowa string section. “It’s a go bigger or go home motto for us up here,” Delaware says.

And about that band name. There are better ones out there, to be sure, but the Artisanals are here to stay. “Clay says it all the time,” Delaware explains. “It’s the only adjective in his lexicon. He says it with everything: ‘Oh, very artisanal.’ It’s a dumb word and we say it all the time to be funny, and it just turned into this thing where we’re like, ‘We should make a band name out of this and just completely make fun of it.’ It’s not to be serious. We know it’s a pretty bad band name, but it’s funny and we wanna have fun. It is a serious rock band and we’re taking it very seriously, but you gotta laugh a little bit and enjoy yourself, too.”