At Maui Tacos downtown, come for the fish tacos, stay for the full bar 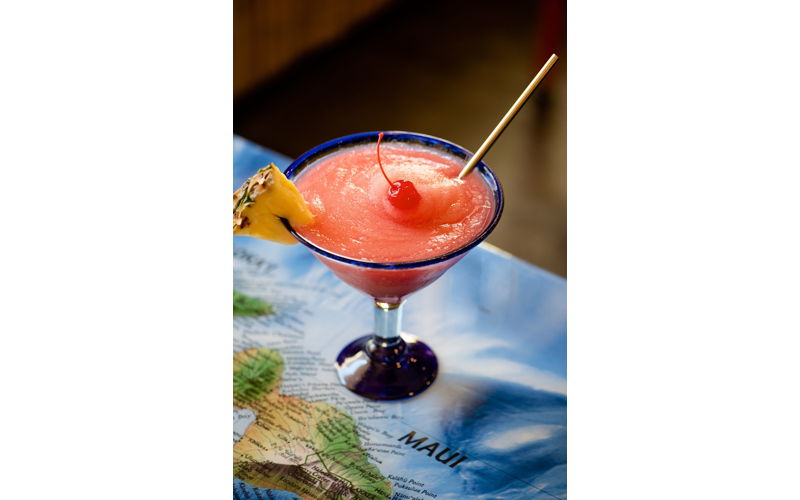 Let’s begin with a brief history lesson: The year was 1993, and Hawaii-based chef Mark Ellman began to open a series of small stands serving Mexican food. He called this enterprise Maui Tacos, and it eventually spread to Oahu. Sixteen years later, in 2009, the eight locations were purchased by a franchising firm.

They say good things take time, and 10 years later, the company’s dreams of mainland expansion seem to be coming to fruition. Currently, there are locations planned for Monroe, La. and Reno, Nev., and this January saw the opening of a Maui Tacos in Las Vegas, followed quickly by another here on Meeting Street.

Sharing an entrance with the 34 West Theater Company, the space occupied by Charleston’s Maui Tacos is awash in primary colors. A tiki hut-themed salsa bar and bright blue map-covered tables share the space with vibrant metal chairs. Existing somewhat confusingly in the service model-chasm between fast food and table service, it also boasts a full bar with plenty of seating.

My tenure as a restaurant critic began on Maui, and having lived there for four years, I’m fondly familiar with the chain. Circa 2015, the heritage locations on the islands were comparably small and shabby, with more of a takeout feel. In addition to the snazzier digs, the mainland menu is also more extensive and boasts an array of tacos, burritos, and signature platters. Food is ordered at the counter, but made to order, which can result in some slow turnaround when there’s only one person working in the kitchen. On the upside, complimentary tortilla chips arrive while you wait, and a self-service salsa bar offers a handful of chipotle-infused options.

IMHO, the Baja grilled fish taco ($4.75) was always the best thing going at Maui Tacos, and that’s still the case four years and 4,700 miles away. It features a double layer of warm corn tortillas generously filled with freshly grilled fish and topped with cabbage, plus a mild, creamy cilantro jalapeno dressing. Better yet, there’s more than enough of everything stuffed in there to warrant dividing it among the tortillas and doubling your pleasure.

Wiki-wiki is Hawaiian for “fast,” and for whatever reason, the namesake of the wiki-wiki shrimp taco ($5.95). Arguably, the word they were looking for was “pipi’i” (expensive), as, at roughly $1.19 per shrimp, it ain’t cheap. Nonetheless, here two corn tortillas envelope five grilled, “Aztec spice-marinated” shrimp, which are then layered with cabbage, mango salsa, chipotle aioli, and cotija cheese. While it’s tasty, it’s no Baja grilled fish taco.

By now you might be wondering, “Baja? Aztec spices? What makes this Hawaiian food?,” and truthfully, not a whole lot, save the occasional chunk of mango or ladle of pineapple salsa. Although he moved to Maui in the mid-80s, founding chef Ellman grew up in Southern California and got his culinary start at a Calabasas, Calif.-based Mexican restaurant. In other words, what we’re talking about here is SoCal Mexican by way of Maui.

Case in point, the chicken taco ($3.95) served chimichurri style. If you’re familiar with chimichurri, you are already in lust with this herby, garlicky, spicy heartthrob. All the flavors are on point when sampled alone, but the shredded poultry in the taco is so intensely chipotle-forward it actually manages to overpower the piquant green sauce. Add on one of the fiery, garlicky salsas offered at the self-serve station and … same thing. Just smoky chipotle flavor all day, but now with a lingering afterburn.

In the islands, barbecue or kalua pork is cooked over kiawe (tropical mesquite) in an underground pit. The embers are covered with rocks and then layered with wet banana or ti leaves. The pig is placed on that and then topped with more leaves, wet burlap sacks, and a layer of sand. If that sounds like a lot of work, it is, and probably why the swine in the barbecue pork taco ($3.95) is more Kansas City than Kahului. Think shredded pork tossed in a thick, sweet, tomato-based sauce and you’re there.

As noted, Maui Tacos features a full bar with a variety of margaritas ($6.95-$13.95), as well as Micheladas ($7.25) and Mai Tais ($7.95). There’s also a self-service machine offering four different Mexican agua frescas ($1.95) like sugary horchata and Jamaica, a sweetened hibiscus tea.

A quick search for “California and French fries” generates links like “How the French fry burrito encapsulates San Diego’s food identity.” It also explains the ‘California corner,’ a trio of quirky offerings all made with steak and french fries. The California quesadilla ($11.95) fills two large flour tortillas with chewy, cumin-dusted bits of steak, shredded cheddar jack, and some French fries. Not my cup of hibiscus tea, but the accompanying guacamole, intense with fresh garlic flavor, was a hit.

Last, but not least, the shark pit burrito ($8.95) yielded an unexpected discovery. Namely, that the charbroiled chicken is the second-best thing on the menu. Also featured in the Lahaina burrito ($8.95), the smoky chunks of poultry steal the show, in a good way, and would likely be a boon to any bowl, taco, salad, or nacho dish.

Billed as a Mexican surf grill, Maui Tacos has enjoyed over 25 years of island-based South of the Border-flavored success. With a new location in Charleston, the casual — yet not necessarily fast — enterprise has made its way part-way around the world, and the bright colors, reggae soundtrack, and a full bar seem poised to satisfy cravings for fish tacos, pineapple salsa, and virtual trips to the Valley Isle.