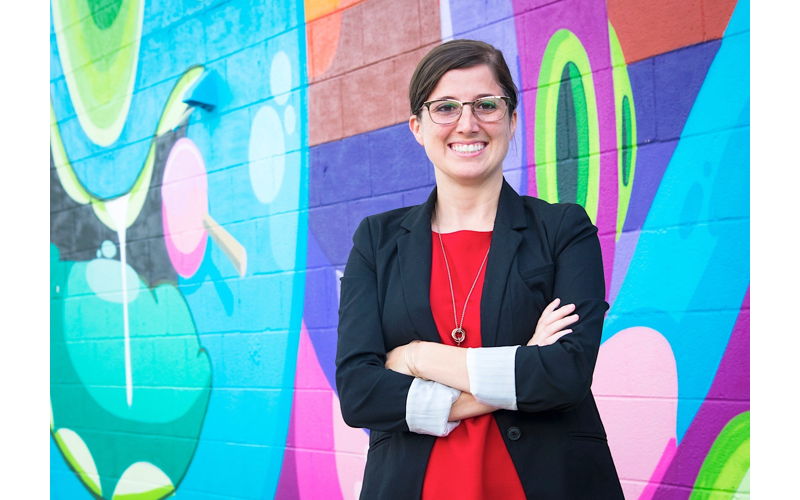 North Charleston mayoral candidate Ashley Peele is one of three people who have filed to unseat longtime incumbent Mayor Keith Summey in this year’s election on Nov. 5.

If elected, Peele would be the first woman and the first openly gay mayor of North Charleston. That new perspective is something that she believes is an important factor to her appeal with voters.

Better representation for all of North Charleston’s demographics seems to be a theme among the 2019 mayoral candidates. According to The Post and Courier, Summey’s opponents agree that his administration has mostly ignored minorities and the impoverished.

About 47 percent of the city’s 113,237 residents are black, according to census estimates. The other two candidates who have filed so far in the mayoral election, Thomas Dixon and John Singletary, are African-American men.

Peele says she wants to keep the demographics of North Charleston in mind, advocating for a hate crime ordinance similar to what the City of Charleston passed in 2018.

“The incident with the transgender woman getting murdered recently brought to light the fact that there’s really no protection for the LGBT community,” Peele says, referencing the murder of Denali Berries Stuckey on July 20.

“The City of Charleston enacted their own hate crime ordinance, the state of South Carolina doesn’t have one, but what can we be doing from the City of North Charleston leadership to say that these are a demographic that we care about and we want to support and we want to protect? But, also with racial equality, we still have some bridges to continue to build since 2015.”

With the most recent death of Dime Doe on Aug. 4 in Allendale County, four black trans women in South Carolina are known to have been killed by violence since 2018. The investigation into Stuckey’s death is ongoing, but police arrested and charged 34-year-old Dominick Archield with murder when he turned himself in on Sat. Aug. 10.

When considering the city’s growing economy and infrastructure, Peele says that she wants to embrace the area’s technology industry and bring more businesses to North Charleston while protecting the residents from gentrification.

“That’s probably one of the bigger topics — making sure that we’re growing equitably and sustainably, and we’re not pushing out residents who have lived here their whole lives and might be the most vulnerable among us,” she says.

She was the first in her family to attend college, graduating from Clemson in 2009. “I knew, if I was going to break that chain of poverty, I was going to need to do something different and education was going to be the way to do that,” she says.

For the past nine years, Peele has worked at telecom company Telogical Services, as a self-described “Chief Problem Solver.”

Peele felt called to run for local office after the death of Walter Scott at the hands of a North Charleston police officer in April 2015 and just weeks later, the Mother Emanuel shooting in Downtown Charleston.

“In 2015, I call that my catalyst year, because there were a series of hate-related violent incidents that sort of hit too close to home and opened my eyes a little bit,” Peele states.

Before filing for the North Charleston mayoral race, Peele went through candidate training with Emerge South Carolina, a program that helps Democratic women learn the ins-and-outs of running a successful political campaign.

“We have women, like Ashley, who have leadership background, either in their professional life and their personal life, many who have participated in other organizations or things of that nature, but they have not necessarily run for office,” explains Melissa Watson, Emerge SC’s executive director. “We take women who already have great leadership experience and potential, and we give them the tools to actually learn how to run and win a race.”

Watson adds that her program teaches candidates how to fundraise, make voter contacts, and anything else an aspiring political candidate would need.

Summey was first elected mayor of North Charleston in 1994, serving on city council and Charleston County Council in the ’80s. Currently, his son Elliott is the chair of county council, representing Mt. Pleasant and North Charleston.

Under Summey’s administration, the city has experienced significant growth as the metro has expanded, with both Boeing and Mercedes-Benz Vans locating in North Charleston since the closing of the naval base shook the area in 1996.

Summey goes into his re-election with over $100,000 in the bank, according to the S.C. Ethics Commission. If re-elected, the mayor’s office says that Summey has not ruled out another run.

Peele believes that the guiding force for her city should represent its varied culture. “You think about the leadership and the demographics of our city, I think this city is hungry for leadership that is more representative of the types of demographics that we have.”