As sea levels rise, changes to the Low Battery will likely reverberate across the city 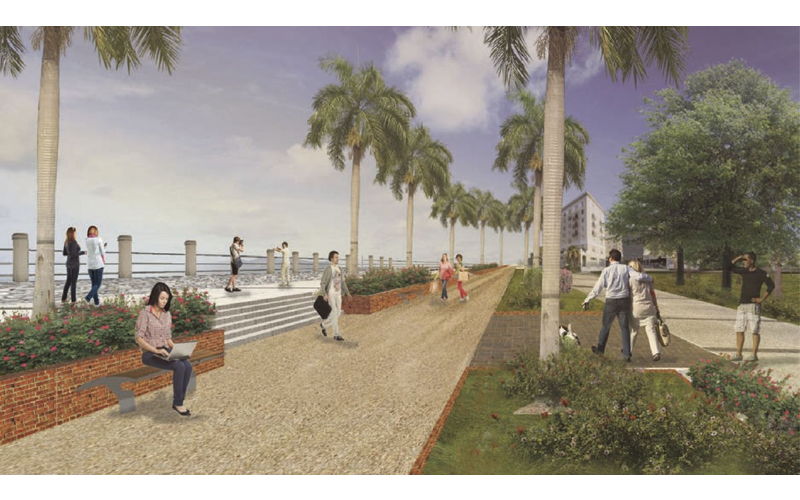 Whether or not the city of Charleston takes action, one of the area’s most well-known landmarks will be dramatically altered over the coming decades. Either the Low Battery will be home to one of the largest infrastructure projects in the city’s history or it will be forever marred by rising sea levels. The questions that remain are how this major preservation effort will take shape and how plans to prepare for the ever-encroaching tide will reverberate through the rest of the peninsula for generations to come.

“We’re focused on starting now. We’re not delaying the process. We want to get the ball rolling so we can predict when this whole thing will be completed,” says Jacob Lindsey of the city’s Planning Department.

Currently the team at the Charleston Civic Design Division have envisioned four possibilities for reshaping the Low Battery in preparation for an estimated 2.5 feet of sea-level rise. Strategy one involves completely filling in the railing that stretches across the waterfront of the Low Battery today, effectively walling in the tip of the peninsula. Although a viable option, this strategy hasn’t quite garnered much enthusiasm from Lindsey.

“We did look at waterfronts in other cities and the main takeaway was that we want to maintain open railing to preserve the view down to the water,” he says. “When we looked at other park spaces that had walled in their railings, we felt that it really devalued the public experience of the waterfront.”

Lindsey admits that option two is where his preference lies. Under this plan, the entire walkway along the Low Battery would be raised 2.5 feet. This option would also allow a wall facing the water to be raised in the future in the case that the city is hit with a more severe amount of sea-level rise.

Option three is deemed the “Half Park, Half Roadway” plan in that it would raise the waterfront walkway and expand the walkway, leaving only one small street running between the Low Battery and White Point Garden. Option four has also piqued the interest of city planners, effectively creating a broad linear park at the city’s waterfront and completely doing away with Murray Boulevard between King Street and East Battery. By far the most dramatic option, this would be in keeping with the city’s long-standing policy to establish public space along the waterways that surround the peninsula. Although, like options two and three, this plan would involve the loss of parking around the Low Battery, something that will affect both visitors and those who rely on downtown parking as a part of their daily routine.

The city’s 2016 Peninsula Hotel Study found that hospitality and food and bev workers account for 34 percent of the workforce in the Charleston metropolitan area. According to a recent study by the College of Charleston’s Office of Tourism Analysis that examined how the city’s hospitality workers commute downtown, more than 80 percent of those who took part in the survey drive to work alone — and over 40 percent make that trip from West Ashley.

Almost 30 percent of hospitality workers reported spending more than $100 a month on parking. A look at the city budget shows that parking revenue in the city is estimated to surpass $24.6 million in 2017, including more than $1.5 million from parking meters and over $3 million from parking violations and expired meters. Looking back at CofC’s survey of hospitality workers, more than 38 percent reported receiving at least one parking citation while working in the past 12 months.

Regardless of how renovations at the Low Battery take shape, the city’s parking strategy will need to be closely scrutinized. In May, Josh Martin, advisor to Mayor John Tecklenburg, said the city would be undertaking the first major downtown parking study in 20 years. According to Martin, funding for the project would come from $350,000 set aside in the city’s budget for developing a transportation plan for the city, as well as conducting the parking study.

“Our transportation studies are all interlinked. We are undertaking a citywide transportation study. We’re also taking on a study of parking downtown. Both of those will address matters related to the Low Battery, but most significantly, if any of the commuter parking is removed from Low Battery in the future, we would seek to replace it with remote commuter lots in other places,” says Lindsey.

In terms of remote parking, CofC’s study shows that hospitality workers are split on whether or not they would utilize a shuttle service downtown if available at a highly discounted rate. With 51 percent willing to take a shuttle to work, the average daily rate that respondents would be willing to pay for the service is $3.39.

“Urban parking is a complex issue. That’s why we are going to be hiring a specialist who can analyze all the different variables that go into parking in Charleston so that we can reconfigure it and get it right,” says Lindsey. “That will include things like the location of parking, the value of parking, and the value of on-street versus deck parking. Really the consultant will take a comprehensive look at how urban parking functions in our city and give us recommendations on how to move forward.”

Of course, rising sea levels will affect more than just the Low Battery, and any plan to protect the edge of the peninsula will need to be tied into an overall effort to improve resiliency across the entire city. Charleston City Council recently approved a request for almost $12.7 million in federal grant funding to pay for structure work and improvements on several downtown fire stations that will require safeguarding against increased flooding.

Those hoping to provide input on how best to reshape the Low Battery can take a survey online, visit the information booth at King Street and Murray Boulevard on Aug. 4 from 8 a.m. to noon, or stop by the Charleston Civic Design Center at 85 Calhoun St. from 1-5 p.m. on weekdays through Aug. 4.

While Lindsey and the city’s Design Division are currently seeking public comment on how best to improve the Low Battery, the proposed changes are just a portion of what is in store for the city.

“It’s a huge effort. Seventeen different city departments are all contributing to a comprehensive look at resilience. We’re going to undertake a vulnerability study. We’re going to have a really in-depth look at how to make the city more resilient that will echo across all city operations. In truth, the Low Battery plan is happening now and not waiting for those other efforts simply because the infrastructure of the wall itself is due for replacement,” says Lindsey. “As we make that upgrade, we want to make sure we do it right with sea level rise in mind. I think it’s plain to see that the wall is in bad condition and needs to be rebuilt. The overall resiliency effort is going to be a major thing that will probably be the primary focus of our government operations for the next 50 years.”