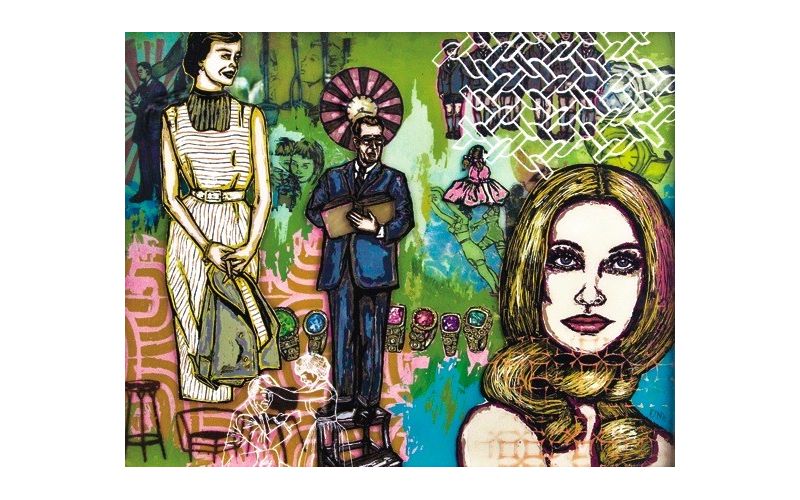 Memory is an integral part of Dorothy Netherland’s creative process. One of the major things that sets her apart from other artists — the fact that she paints on glass — was inspired by her late grandfather, a man that holds a solid place in her memory bank.

Netherland’s grandfather built clocks and finished them off with painted glass panels. “He died when I was a small child, and I was actually the person who discovered his dead body, slumped over his office chair. It’s a surreal memory and must have influenced my choice not only to start experimenting with painting on glass, but also to explore certain themes which have stayed with me.”

Netherland focuses almost exclusively on women in her works, most of which are inspired by magazine spreads and advertisements from the 1950s and ’60s.

“I think I respond to the people — yes, mostly women — in these photos because they embody the idea of the past in the sense of personal history, which we are never free of. I can go on for a long time about how interested I am in the idea of faulty memory and how it informs our deepest sense of self, and the role of misinterpretation and the power of the imagination to fill in the blanks, and how the paintings are, for me, fragments of narrative,” she says. “These are things I’m thinking about when I make the paintings. But it all really boils down to transience.”

The subjects of her paintings — she calls them characters — aren’t there to make a statement, but to create a narrative.

“It feels like a treasure hunt, looking at pictures and seeing what I can read into an expression or a gesture,” she says. “The photos seem so loaded with double meanings for me, but not for the obvious reasons. I don’t feel that I’m using the images in a nostalgic way, or making social commentary. I’m interested in them as people. I want to make them my cast of characters, and make it personal. I’m more interested in particular ideas and themes than I am in contrasting our contemporary ironic self-awareness to the comparative innocence of the time. That would be obvious and expected.”

It took Netherland years to discover her passion for art; she worked as a bartender until her mid-30s, when she moved to Charlotte and began taking art classes.

“It was like a light switch going on — this was it. Art absorbed me completely,” she says. “I knew it was the right choice for me.”
She relocated to the Holy City and started working toward a BA in studio art at the College of Charleston, earning her degree in 2000. Two years later, she started experimenting with glass.

“I was immediately drawn to the possibilities I discovered in mark-making on the glass, the way you can put down some paint or ink and then scrape it away and shape your drawings, constantly applying and reapplying new color and imagery,” she says.

While glass remains her preferred medium, her techniques have changed over the last few years. “I’ve increased the number of panes, added screen-printed drawings and patterns into the paintings, and, most recently, started using an ink-transfer process to add in imagery from my past paintings. Now I’m also beginning to etch onto the top pane of glass with a Dremel tool.”

Netherland held a studio at Redux for five years and one at 10 Storehouse Row for two years, but now she works from home.

“Having my studio at home works for me now,” she says. “I’ve almost always got a deadline, and now I can work any time I can fit it into my schedule simply by going upstairs. And I’m OK with being in a studio by myself now.”

She has exhibited at City Gallery, SCOOP Studios, and Redux, as well as galleries in Savannah and Columbia. Built from Scraps is her first solo show in Charleston. The event also marks her recent acceptance into a residency program in Neustadt, Germany.

As Netherland continues to grow as an artist, her pool of inspiration deepens, although her goals remain the same.

“I’m inspired by a beautifully written sentence or a great observation about a character in a novel or a scene from a movie or a gesture in an old photo, which I can subvert and assign different meanings to. I draw them and they change. They come back to life and become a piece of a puzzle, someone’s life that maybe they never had enough time to really figure out. I’m inspired by the hugest, most horrid inequity of all: The fact that some of us get more time here than others.”