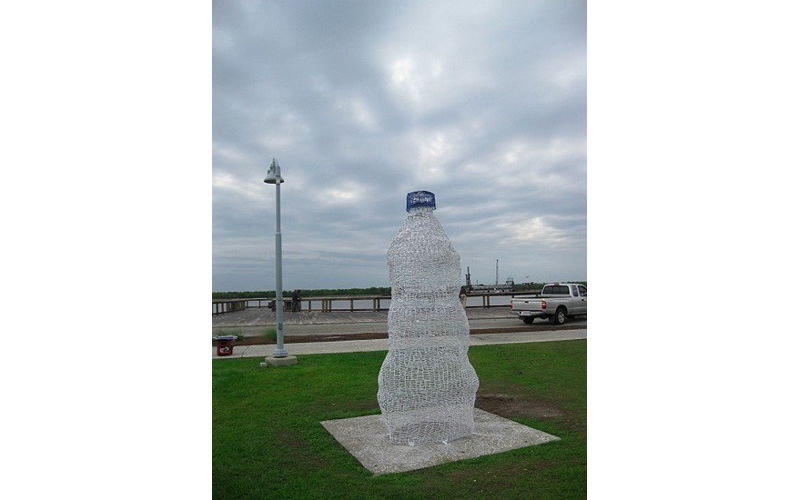 Back in January, artist Jonathan Brilliant wheeled his new metal sculpture “Woven Structure” into the center of the traffic circle near North Charleston City Hall and bolted it into the concrete. Hundreds of people drive past the sculpture every day now, but few know its origin story.

Brilliant, a Charleston native now working in Raleigh, N.C., is best known for his massive, temporary installation pieces made of wooden coffee stirrer sticks woven together. But he’s also handy with a welding torch, and in 2010, his steel sculpture “Big Water Bottle Basket” was featured in the National Outdoor Sculpture Exhibition, which takes place in North Charleston’s Riverfront Park. According to Brilliant’s website, the sculpture was made from discarded rail spikes and “was created as a meditation on the portable consumer fetish object of the water bottle and the significant role that baskets played in the gathering of water in early cultures.” At the end of the year-long exhibition, Brilliant donated the piece to the city, and the city moved it to a storage building on the Navy Yard for the purpose of repairing it before installing it at another site.

But then it disappeared.

Neither Brilliant nor the City of North Charleston know where the 300-plus-pound sculpture ended up, although Brilliant suspects a thief took it to sell for scrap metal. “I don’t think they were even stealing art,” Brilliant says. “I’m 99 percent sure whoever took it, took it because they just saw metal. Or maybe it’s in someone’s backyard. That would be hysterical.”

Fortunately, the city had taken the precaution of insuring “Big Water Bottle Basket,” and the resulting insurance payout allowed the Cultural Arts Department to commission a brand-new work from Brilliant. This time, they asked him to design something for the traffic circle in the City Hall parking lot. Marty Besancon, director of the department, gave Brilliant the dimensions and kept Mayor Keith Summey in the loop as Brilliant submitted sketches. Brilliant says he had an easy time working with the city as he sketched out thumbnails of his design on Post-It notes and submitted them to Besancon. “They just trusted me, and they were so easy to work with,” Brilliant says.

Brilliant says he doubts anyone will steal “Woven Structure,” as it’s surrounded by police cars and attached to a concrete base. But he did have safety concerns in mind as he considered what he would build. “It had to be an object, but you still needed to be able to see through it. It couldn’t have obstructed the traffic view,” Brilliant says. “It’s funny, this is the conversation I have a lot of times with people. So much of art is just logistics. The actual designs and drawings and the form, that was actually pretty simple.” Once the plans were in place, he spent about a month assembling the piece, took it to a powder-coater in Raleigh, and then drove down to North Charleston to install it.

Besancon says she’s pleased with how the “Woven Structure” turned out. “It is a silver color, but there’s silver on the side of the buildings, and it also reflects the light, so that with sunsets and even lights from events from different buildings, it reflects the color of the lights in the area.”

Brilliant, whose work is often built to be torn down, doesn’t sound crestfallen when he talks about the fate of “Big Water Bottle Basket.” “Honestly, it was out of sight, out of mind,” he says. “I hadn’t even thought about it. To me, it was already gone.”

This year’s entries in the National Outdoor Sculpture Competition were recently installed in Riverfront Park. The winners will be announced during the North Charleston Arts Festival Artist Reception on Friday, May 3 at 6:30 p.m. at the Charleston Area Convention Center. The pieces will be on display in the park through March 2014.

The National Outdoor Sculpture Exhibition revs up in North Chuck