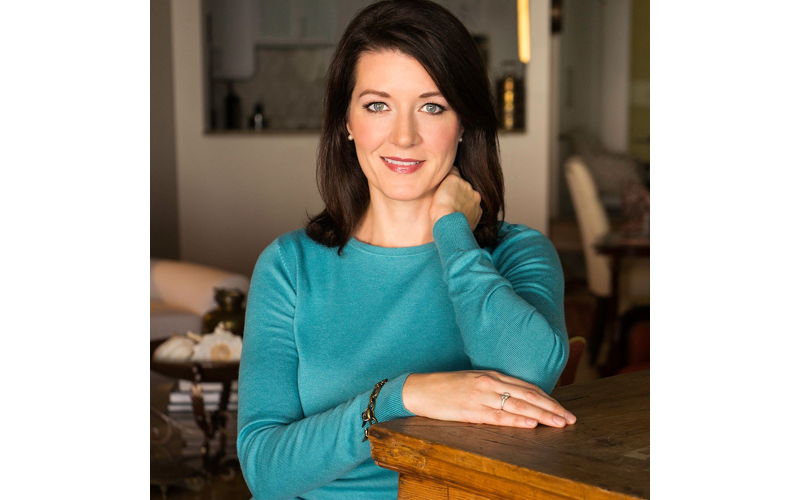 Maeve Donnelly loves sharks. It’s more than love, really, it’s a deep appreciation for the creatures, a respect for both their power and their vulnerability. Maeve (pronounced May-ve, by the way) follows sharks around the world, tagging them, reconnecting with them, and allowing herself to name them, even though she knows it will lead to a connection she shouldn’t have. How does Maeve explain this love? Well, because she was bitten by a shark, of course.

“I am most surprised that sharks figured in the book,” says Ann Kidd Taylor, author of The Shark Club, and creator of Maeve Donnelly. “I was really, really scared of sharks when I was a kid. I think that’s the typical knee jerk response, just to be really scared.”

Taylor, the daughter of The Secret Life of Bees‘ author Sue Monk Kidd, is also the co-author of NYT best-seller, Traveling with Pomegranates, a memoir she wrote with her mom. And Taylor knew that after working on nonfiction she wanted to dive (water pun totally intended) into a novel.

“I think my imagination gave me something right when I needed it,” says Taylor. “I learned through these conversations with my imagination that Maeve was drawn to the ocean, that this is where she belonged and once I knew that, the exploration, I could do my detective work.”

Maeve Donnelly was bitten by a shark when she was 12 years old and in retaliation the people in her small Florida town headed to the sea in swarms, killing as many sharks as they could find. It upset young Maeve and she knew that one day she would do something to correct the error of their ways.

Fun fact: according to National Geographic you have a one in 3,700,000 chance of being killed by a shark in your lifetime. Not so fun fact: because of the intense fear most people feel towards sharks, the creatures are demonized more often than not, and according to a 2013 Nat Geo statistic, about 100 million sharks are killed, directly and indirectly, by humans every year around the world. Not really a fair fight, eh?

“My son was a huge piece of this. He was five at the time,” says Taylor of writing Shark Club. “He was very curious about the world, he had this infectious curiosity and love for sea creatures. He had this way of thinking, ‘Of course we love sharks, why would we not love sharks?'”

Taylor watched a number of documentaries, including one on shark finning, which gave her the info, and insight she needed to home in on the character who truly cared for sharks. “I was led by what was coming from the inside instead of trying to impose something onto this character and the plot.”

Maeve Donnelly is a kickass protagonist, caught between two lovers, a shark finning operation in her home town, and a complicated relationship with her twin brother, Robin. Like Charleston author Mary Alice Monroe, Taylor’s first novel falls directly in the realm of environmental activism, but, also like Monroe, her deft use of prose steers the plot from driving directly into some heavy-handed moral ending.

And despite the love triangle, Taylor insists that this book isn’t all about romance, either. “I didn’t know halfway through who she was going to end up with. But what I always knew was that no matter who she ended up with, she was gonna be OK,” she says. “I wanted her to have the ending she deserved.”

Taylor has found the formula for a well-balanced beach read. Shark Club has the typical love story, but with a strong female lead; the fight between inner and outer demons, featuring realistic, flawed characters; and the quirky qualities of a small town and dreamy beach setting.

The setting, the fictional Palermo Island, was inspired by Taylor’s relocation from Mt. Pleasant to Florida’s Marco Island. “I think being here on the Gulf of Mexico, this tropical island, it was a whole new landscape and atmosphere and it completely woke up my senses,” says Taylor. “Me finding a home and Maeve finding a home just dovetailed.”

You can buy The Shark Club ($26) online at amazon.com or pick one up at the Sophia Institute or West Ashley’s Barnes & Noble.