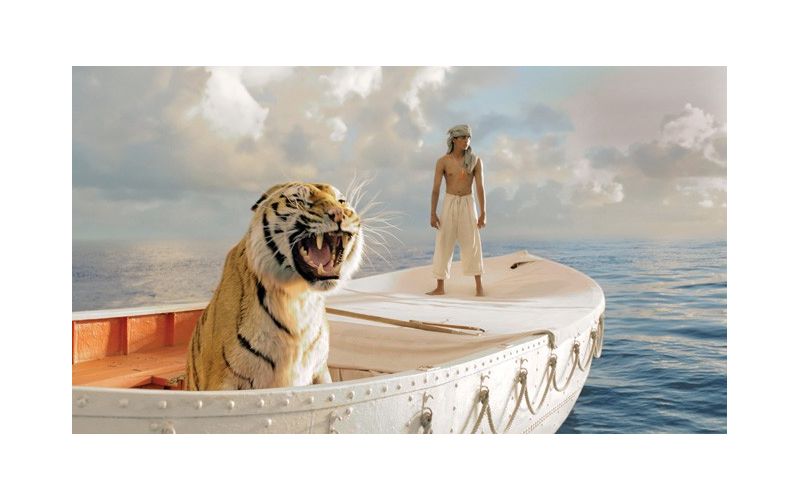 Movies like Life of Pi don’t really exist anymore. A big-budget studio effort set entirely in foreign countries with not a single famous face among the cast? It would feel more at home in the 1950s, marketed among like-minded Technicolor epics, than in the year that gave us The Avengers, Spider-Man, and The Dark Knight Rises. Ang Lee’s hallucinogenic 3-D opus is defined by ideas and visuals, a far cry from the franchise-focused tentpoles we’re used to, and that alone is enough to make you admire its ambition. But the feeling is short-lived.

The credits introduce us to the title character’s lush home, an Indian zoo run by his family. His mother is a spiritualist, while his father preaches the importance of science and tough love. Feeling his sons don’t show nature respect, he forces them to watch a Bengal tiger named Richard Parker rip a goat to shreds. For a moment, the film seems to be all about Pi’s struggle between his parents’ differing outlooks — it suggests Tree of Life, redone for the Twilight generation. It’s nothing short of gorgeous. Every aspect, from the dusty classrooms to the vibrant colors of the street to the drab interiors of Pi’s home, is rendered sumptuously by Lee’s camera.

As stunning as those visuals are, the ideas behind them don’t add up to anything more than spiritualist posturing. I suppose you can blame Yann Martel, author of the novel Lee is adapting and the brain behind these big ideas. Rafe Spall plays a veiled version of the author whom we meet sitting down with the title character. He’s ready to hear a story that inspires him, and Pi (Irrfan Khan as an older gentleman, and Suraj Sharma during the flashbacks) has promised a tale “that will make you believe in God.”

Life of Pi has a lot to say about our creator — fitting, since its main character subscribes to Christianity, Hinduism, and Islam simultaneously. But I wonder if anyone could tell me what this film has to say about religion other than “be strong, and be open.” God is Hollywood’s last taboo, sure, but this sentimentalizes faith more than it investigates it. The Grey was a much more complex — and therefore satisfying — inquiry into God and his silence, just to compare Pi to this year’s other blockbuster religious drama.

The film could have continued as a coming-of-age drama, and you would have heard no complaints from me. But, at heart, this is an event picture. And so it goes that Pi’s family leaves India, and their cargo ship crashes, and he ends up being the only survivor drifting aimlessly on a lifeboat along with the aforementioned Richard Parker and a few other animal stowaways. Now it becomes clear what Lee’s true interest in the source material is, more than Pi’s spirituality and conflicting religious beliefs (a concept quickly dropped.) It’s all about fantastical visuals — the night sky bouncing off the clear ocean, a tiger floating around in a makeshift raft, fish skipping across the water and directly into the frame.

And quite frankly, I wish I could have enjoyed it all a lot more. Don’t get me wrong, the compositions are breathtaking — they recall the work of director Michael Powell (The Red Shoes), the colors bouncing off the screen with a beautifully artificial zest. But I often felt I was watching the world’s most expensive screensaver. The spiritual elements run an obvious second to the spectacle when it comes to these storytellers’ priorities. And that leaves the faith-based setup feeling a fair bit shallow, like little more than just another effect in Mr. Lee’s toolbox. If it weren’t so blatantly aching toward profundity — constantly hitting us with insights like “Faith is a house with many rooms” — I would sit back, accept the visuals as the raison d’etre, and enjoy the show.

But unfortunately, it does bring up God at every turn, and it does engage in overly allegorical asides, like an island that literally cannibalizes itself — an idea that works much better on the page than on the screen. It even needs to give us an overwrought twist ending, one that renders the whole story in metaphorical terms but also does more to invalidate the previous 100 minutes than it does to illuminate them. Pi asks his Writer, while he’s audibly searching for the story’s subtext, “Why does it have to mean anything?” For Lee, all Life of Pi means is an excuse to capture some borderline surreal images. This isn’t the introspective masterpiece it so desperately wants to be. It’s just a beautiful postcard.