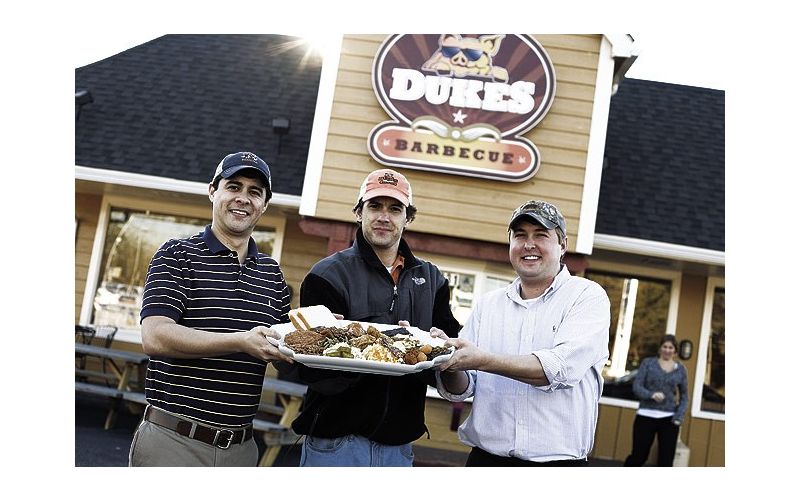 Put Up Your Dukes

In the Midlands and Lowcountry sections of South Carolina, the kings of barbecue are actually Dukes. Members of the Dukes family, that is. By my latest count, there are at least a dozen Dukes barbecue restaurants in operation today, covering a geographic area from Aiken all the way down to Charleston. And there’s a dozen more that were once in existence but have since closed down. With the addition of Palmetto Pig in Mt. Pleasant and now the new Dukes Barbecue on James Island, that number has grown by two.

Note that the name is properly spelled “Dukes,” not “Duke’s,” for the barbecue is the legacy of the Dukes family. Almost all of the Dukes restaurants can be traced back eventually to the children of a single patriarch, Emanuel (Manuel) Dukes, who was born in rural Orangeburg County around 1875. One of Dukes’ children married into the family of Willie Baltzegar, a noted local pitmaster who cooked barbecue for dances and other events in the Rowesville community about 10 miles south of Orangeburg. The Dukes sons helped out at the events and learned Baltzegar’s barbecue techniques and recipes. Starting in the 1950s, they put that learning to commercial use by opening a series of restaurants in and around Orangeburg County.

Earl Dukes pioneered the barbecue trade in the city of Orangeburg, opening a thriving downtown business, which he later sold, only to open another restaurant in Cameron. Brother Danny Dukes headed west a little, opening a restaurant in Aiken, while sister Cercie was involved in the Dukes Barbecues in Elloree and Smoaks (both long closed), and some other brothers and sisters or maybe their spouses or in-laws opened joints in Ridgeville and New Ellenton and Blackville and … well, it gets confusing really quickly.

The Dukes were not the only family from southern Orangeburg County who went on to make a name for themselves in the barbecue business. In the 1940s, Joe Bessinger gave up his farm in the Union Township of Orangeburg County to move to Holly Hill and open a café. Three of his sons — Melvin, Thomas, and J.D. — later took the barbecue style they learned from their dad and opened a series of successful Piggy Park drive-ins in the Charleston area, while a fourth brother, Maurice, did the same thing in Columbia, in the process gaining quite a bit of notoriety for his political views on subjects such as integration and civil rights.

The Bessinger brothers may have gained more notice from folks outside of South Carolina, but the Dukes family quietly and steadily built a barbecue empire. With two (and, at one time, three) separately-owned Dukes barbecue restaurants, the town of Orangeburg remains the center of that kingdom. In Orangeburg, you identify your preferred Dukes not by which family members run it or by the street it’s on but rather by what it’s near. Thus, you must specify whether you mean the one “next to the fire station” (that is, on Chestnut Street) or the one “by the Pepsi plant” (on Whitman Street), an identification made a bit more difficult for outsiders a few years ago when the Pepsi bottler closed down.

The Dukes family have long had a presence in the Charleston area, too. In the 1950s, Harry Ott and his wife Elma (another Dukes sister) opened Dukes Bar-B-Q on Spruill Street in North Charleston, which was then booming thanks to post-war jobs at the Navy Yard. The Otts remained Orangeburg residents, cooking their barbecue at home and bringing it down to Charleston to sell on the weekends.

That business is run today in the same modest, white-painted cinderblock building by Elma Ott’s granddaughter, Lisa Warner, and she keeps to the old traditions, including still cooking the barbecue up in Orangeburg (at the Chestnut Street Dukes, which is owned by Warner’s mother). Even for a Dukes restaurant, most of which are open just Thursday through Saturday, the North Charleston has very limited hours (open from 3 to 8 p.m. on Friday and Saturdays only), and inside it’s about as barebones as a restaurant can get, with concrete floors and plain white walls. The barbecue, hash, and pork rinds are served all-you-can-eat from a steam-table buffet, and you eat them at long wooden picnic tables covered with red-checked vinyl tablecloths, a plastic pitcher of iced tea gracing each one.

Another member of the Orangeburg Dukes clan, Milton Jefferson Dukes, was not only a barbecue restaurateur but also one of the state’s most colorful (if not most successful) political figures. A staunch anti-whiskey campaigner, his political career included runs for governor in 1962, 1970, and 1974 as well as assorted bids for the state legislature and for sheriff, all of which gained lots of attention in the press and all of which ended in defeat. “You know I’ve always been a good loser,” he told The Post and Courier in 1974. “I don’t know how to do anything but lose.”

Maybe so, but he did know how to cook barbecue. Milton was the son of George Jefferson Dukes, Earl and Danny Dukes’ older brother. He arrived in North Charleston just after World War II, and his business career included stints as a trailer salesman, used car dealer, and finance man. On the side he ran several barbecue stands in North Charleston before finally moving out to Summerville and opening a more permanent restaurant.

Milton Dukes passed away in 2003, but Lillian and Michael Dukes have kept the family operation going, moving a few years ago to a new location on Live Oak Avenue in Moncks Corner, where they still serve up the classic Dukes style ‘cue on Thursday, Fridays, and Saturdays.

Two more restaurants with links to the Dukes family have opened here recently, bringing even more of that signature family style to the Charleston area.

Though it bears the old family name, James Island’s new Dukes Barbecue, which opened in a refurbished Captain D’s location on Folly Road last fall, is not tied by actual blood relations to the Orangeburg County Dukes. But there is a direct business link and continuity of ‘cue. Co-owner Bryan O’Quinn’s father, Terry O’Quinn, has run the Dukes Barbecue in Walterboro for decades, after buying it from one of the Dukes family, and he helped his son get set up and operating here in Charleston.

On Folly Road, they stay true to the time-tested Dukes formula. It’s an all-you-can-eat buffet ($10 for adults, $6 for children) that sticks to the basics: pulled pork, hash and rice, fried chicken, and a whole bunch of sides. The pork is tasty and filling, and I have to give special notice to the hash and rice, that mysterious reddish South Carolina stew made from slow-simmered pork and a bunch of other stuff you might not want to know. The Folly Road version is thick and rich but neither too spicy nor too glopped up with tomato — a wonderfully filling dish.

In case the pork and hash don’t totally stuff you, the sides should do the trick. They include vegetables (butter beans, corn, collards, green beans, stewed tomatoes, black-eyed peas) and the not-quite-a-vegetable (coleslaw, potato salad, macaroni and cheese) plus some good golden-battered stuff (fried okra, hushpuppies, and corn nuggets, a sort of fritter made of deep-fried creamed corn). But the classic Dukes touch is the big loaf of Sunbeam white bread that adorns each table, still in the bright yellow plastic bag with the curly-haired girl on it.

You wouldn’t know it from the name, but another relatively new local barbecue joint, Mt. Pleasant’s Palmetto Pig, also has ties to the Dukes family, though these are a little more complicated. Father and son Jerry and Bennett Crites opened the restaurant a little more than a year ago as a franchise of Columbia’s fledgling Palmetto Pig chain. The original Palmetto Pig was opened on Devine Street in Columbia in 2002 by Gene Antley and now has locations in Irmo and Longs, too.

Antley, a former standout running back for the University of South Carolina, grew up in the barbecue business. His was one of the three families that ran the Dukes Barbecue on Whitman Street in Orangeburg. After Antley’s father, James, passed away in the 1990s, Gene and his three brothers opened Antley’s Bar-B-Q on Sims Street, thus creating a tripartite barbecue schism in Orangeburg, dividing residents into those who prefer their barbecue from the Dukes “next to the fire station,” the one “by the Pepsi plant,” or, now, at Antley’s.

In Mt. Pleasant, the Palmetto Pig name may obscure the Dukes connection, but the lineage is clear in the barbecue itself. Its buffet (all-you-can-eat, of course, $10 for adults, $6 for kids) features pulled pork, hash and rice, fried chicken, and, in a bit of a twist, barbecue chicken, too. The pork is finely chopped, salty, and quite juicy. And be sure to go for plenty of the mahogany-colored outside bits. They’re perfect for folding along with a big squirt of barbecue sauce and some finely chopped coleslaw inside a slice of white bread. (At the Palmetto Pig they go a little more upscale, ditching the plastic sacks and putting the slices of white bread out in a stainless steel bin with a plastic lid).

And speaking of sauce, at the Palmetto Pig you can sample the signature Dukes-style condiment, too. Some folks mistake it for a mustard-based sauce, but it’s not the same as what you might find at one of the Bessinger joints. This is a smooth concoction made with both ketchup and mustard and is much milder and subtler than the sweet mustard-and-pepper stuff. (For those who prefer the bright yellow stuff, and I admit I’m one of them, the Palmetto Pig has plenty of mustard-based sauce, too.)

Local barbecue fans are surprisingly loyal to whichever Dukes location is their favorite, and the debates over which serves the best barbecue can get quite heated. If I may risk being heretical, the differences are, to my tastebuds, pretty subtle. Most of the various Dukes restaurants stopped burning logs decades ago, switching to gas-fired cookers that rely on wood chips for smoke flavor. But, even if not overly smoky, it’s still good ‘cue, juicy and finely chopped and a perfect medium for a tangy barbecue sauce, be it the orangish tomato blend or the stronger mustard stuff.

This is an era of barbecue globalism, and the menus at many of our “local” barbecue joints now offer everything from wine-marinated beef brisket to dry rubbed ribs, plus barbecued chicken wings and smoked turkey, too. And you can top it with spicy red sauce, gooey sweet brown sauce, and even white mayonnaise sauce. But, every now and then, it’s good to take a step back to the original local style, and in these parts that style is the Dukes’.