An animated Robin Wright gets real in The Congress 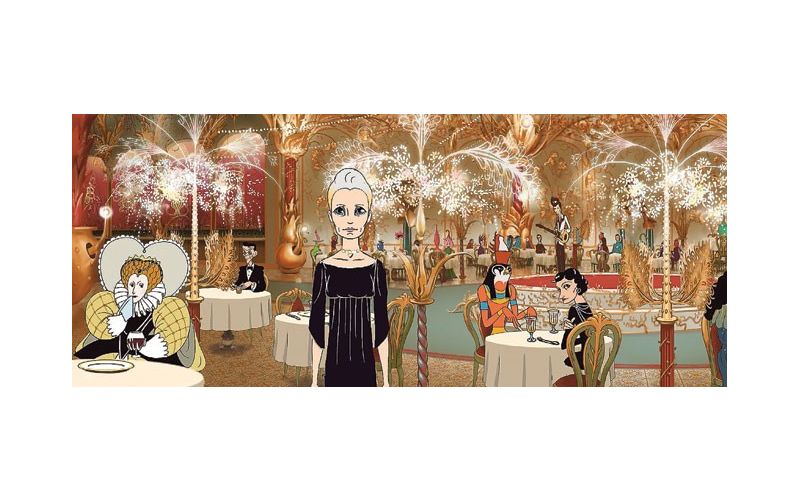 In The Congress, Ari Folman, who held willing audiences rapt with his Oscar-nominated animated tale of an Israeli incursion into Beirut (2008), goes in an entirely different direction with this wide-ranging contemplation about individualism, control, ageism, and the dynamics of Hollywood.

“Different” is loosely how Folman described his goal with The Congress at the Cannes Film Festival earlier this year, but in reality, the two films bare much in common. Both rely heavily on dream sequences and alter-realities to convey horror and meta themes, and both are animated in the same flat, textual style that is piquantly elegant, spare, and cartoonish all at once.

Folman’s latest takes its cue from the Stanislaw Lem novel The Futurological Congress and doesn’t really get to any of the plot elements or themes of the satirical 1971 future-scape until it transitions into an animated format about halfway in. The preamble before is a pat, but intriguing affair with the actress Robin Wright playing a fictionalized version of herself. The faux Robin lives a strange, yet cozy existence in a converted DC-9 hanger on the perimeter of an airport. Her son, Aaron (Kodi Smit-McPhee) for unexplained reasons enjoys flying a boxy red kite over the fence and into regulated airspace, which draws the ire of authorities not to mention two vicious German shepherds, an occurrence that bodes far heavier in the animated future world. Aaron too is ill and losing his hearing and sight, a condition that opens Wright up to a suggestion from her agent (a needling Harvey Keitel) to undertake the ultimate sellout: body, mind, and soul — screened into a computer so Hollywood can do with her as they like — even put her in a sci-fi movie, something the actress abhors.

Those familiar with Wright, know of her roles in The Princess Bride and Forrest Gump, but her career never quite took off like it could have, in part because she was too fickle and selective, and in part, because that’s just how the biz goes. In Folman’s universe that’s the rub her agent lays on her, professing that she can finally be the star she never was and take care of Aaron as well.

The deal, which will essentially forge Wright as a timeless, ageless superstar with an unlimited work capacity and deep bank account, requires her to stop acting and let the studio clone her into a virtual being for their using. What they want is her every emotion, every facial expression, even how she orgasms. The cloning process happens on the lot of Miramount — a great play on Miramax and Paramount studios. (You can’t help but wonder if the shifty studio boss played by Danny Huston isn’t a sly spin on Harvey Weinstein.) And it feels like a scene right out of the sublime 2012 French film Holy Motors with the end goal being something more akin to Andrew Nichol’s tepid 2002 S1m0ne, in which a studio tries to avoid the mercurial nature of the human ego by replicating its complicated star virtually. It’s nothing new either. After Brandon Lee, the son of martial arts legend Bruce Lee, died tragically on the set of The Crow, the 1994 film was completed posthumously through body doubles and digital renderings of the dead actor.

The notion of avatars doing for us what we can’t possibly do would seem like a pretty decent deal — stay at home and chill while the virtual makes me a buck. That predicament, for better or worse, never really gets explored in The Congress. After the “personality capture” session we catch up with Wright some 20 years later en route to address a gathering of Lem’s “Congress” in a toon-town called Abrahama. That’s where the film gets all pastel, surreal, and gonzo. What unfolds is like a blenderized whirl of Heavy Metal and the animated segments from The Wall, if orchestrated in a subliminal dreamy haze by the great Hayao Miyazaki.

In the real world, Wright’s digitized doppelgänger has become a superstar, ruling the box-office with a Transformers-worthy franchise and on camera spouts vapid studio-endorsed world views. Meanwhile, down in Abrahama, the real (now cartooned) Wright struggles to regain her identity and goes counter-flow to the Congress’s promoters who want to turn her into a drug so all people can be Robin Wright if they want to be.

On the whole, how The Congress works for you depends more on your proclivities and patience than your receptiveness to the mixed format. To think of The Congress as a personal experience more akin to Terrence Malick’s Tree of Life, would be more apt. Wright, brave and willing to give of herself, delivers a dignified performance that holds the two diverse ends together with confidence and confluence.

The Congress might not be a gathering point for everybody, but if you do let it wash over you and allow its ideas and ideals to sink in, you might just find yourself pleasantly haunted by profound ditherings and what ifs for days to come.