Amanda Greeley on Thelma, her line of locally designed shoes 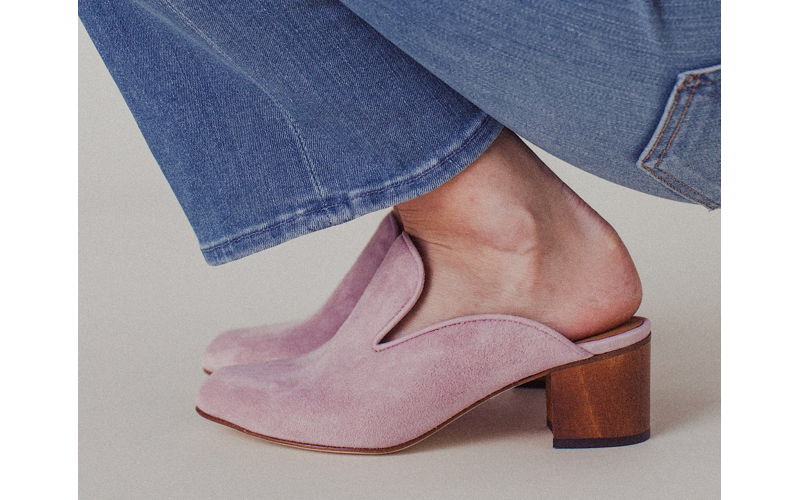 “Maybe there isn’t a real Thelma …”

Before Amanda Greeley moved to Charleston, fell in love with brunch at Chez Nous, and launched an entire shoe brand focused on just one style, the loafer, she was making her way through New York City’s otherworldly fashion industry — with piles of fabric and a load of hope.

“Learning how to navigate the garment district leads you to weird corners of Brooklyn where you have, like, unmarked doors and a shopping cart of fabric and no Uber to take you there.”

Greeley, who founded Thelma around three years ago (about the time she moved to Charleston), laughs about it now, sipping Second State coffee and watching a late-summer rain threaten to swallow Beaufain Street. She says she wished she could’ve been a “city bitch,” but Charleston seems to suit her fine. Greeley is wearing a pristine but worn-in white button-down, jeans, and a pair of her classic loafers in the pebble beige.

Those are the loafers that brought Thelma to life.

When Greeley launched her company with one classic shoe it wasn’t just a starting point for the brand, but also for her new life as a Charleston-based designer. Formerly a merchandiser at Coach, Greeley is no stranger to the women’s fashion industry. She grew up watching her mother, the former CEO of Victoria’s Secret, and began designing for the lingerie startup Cuup while living in New York. Before starting Thelma, she founded, ran, and folded the Tink + Tiger pajama line.

She’s always been a fan of loafers.

“Thelma is my number one,” says Greeley, a quintessential entrepreneur who has “a new idea every five seconds” and stays up late wondering, “maybe I’ve done everything wrong.”

In many ways, Thelma is the opposite of that, like Greeley’s grounded alter-ego. The brand started small and steady, with a limited supply of shoes, Italian-made from responsibly sourced materials. The company does not do big sales, adhere to a break-neck fashion calendar, or release new designs to appease always-eager online shoppers. Thelma is, if nothing else, carefully crafted and self-assured.

A simple design. An Italian shoemaker. A friend who started a shipping warehouse — one by one, Greeley built the pieces of the brand. Since then, she’s added sparingly and mindfully: an ankle boot, a cheery pink suede (already sold out), and most recently, the slide and its higher-heeled sister the mule.

“The biggest thing people don’t realize is that nobody has all the answers about this stuff. It’s really a big scavenger hunt,” says Greeley. “You have to decide you want to do something and then figure out how to do it.”

Inspired by Charleston style and burgeoning local networks of female entrepreneurs, Greeley’s goal is to make classics that are anything but drab and stuffy.

“The first color I saw that I knew I needed to make was this vibrant red. It’s like a Ferrari. Now color is a really important part of it,” she says. “It can kind of make you smile. Like, it’s not so serious. It’s a loafer, but we’re having a good time here.”

The way she sees it, shoes are personal and political. Minimalism is being eschewed in favor of pieces with personality. “Now, I feel like we’re in this place of really expressing ourselves fully.”

Greeley and I talked through a whole pot of coffee and nearly the entire storm — about her upcoming wedding at the Gadsden House, preoccupations with being perpetually busy, dreams of a big city brick and mortar, and the beer at Lowlife Bar on Folly. It wasn’t until that evening that I remembered to write back and ask the most basic question: Who is Thelma?

“There isn’t a real Thelma, that I know anyway,” says Greeley. “When I began working on Thelma, I knew I wanted it to have a woman’s name and I knew I didn’t want to name it after myself. I really wanted the brand to have its own persona. Not long into working on the project, I thought of the name Thelma and it simply stuck. It felt right. To me, Thelma evokes ‘free spirit’. I also felt like ‘Thelma’ could be any age.”

S.C. DHEC missing permanent leader. South Carolina’s Department of Health and Environmental control has been without permanent leadership in two of its top positions for months, even as the state battles a climbing toll from the worst global pandemic in a century. Source: The Post and Courier Courts find no evidence of fraud, despite claims. […]

GrowFood Carolina is partnering with the Humanities Foundation to distribute 500 local food boxes to James Island on Nov. 23.

Editor’s note: Charleston City Paper publishes letters received each week. To submit your own reaction to City Paper coverage or local issues, we welcome letters to the editor. Legalize It U.S. House Majority Leader Steny Hoyer recently said, “The House will vote on the MORE Act” in December. The MORE Act, also called the Marijuana Opportunity Reinvestment and Expungement Act, […]