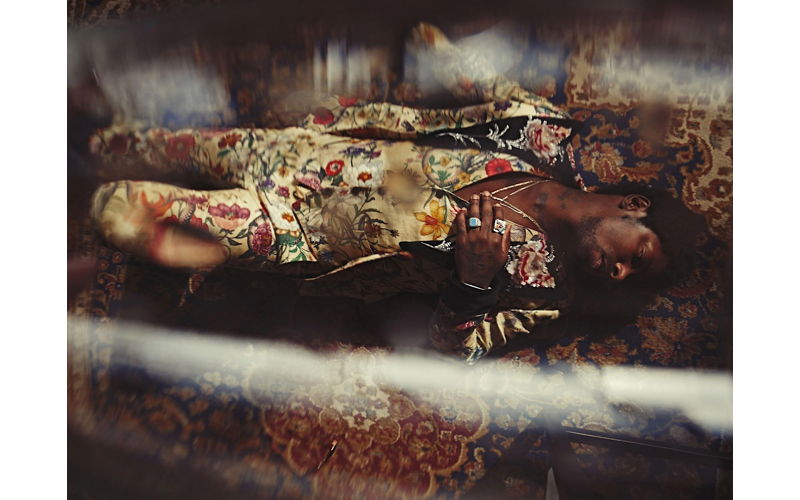 Atlanta-based soul singer and guitarist Curtis Harding doesn’t get nervous when he takes the stage, even to huge audiences like he performed for at his hometown Shaky Knees Festival in May, or the major European arts festivals he’ll play this summer.

“I’ve been in front of crowds all my life,” Harding explains, on the phone from his home. “The nervous factor comes in when I have to do like, radio in the morning, because I know I’m tired and I have to play a show that night.”

In other words, Harding’s like a lot of other people. He knows he’s good at his job, and it doesn’t stress him out. But when his schedule fills up, uneasiness creeps in.

“The most important thing, at the end of the day, is the music. I want to be 100 percent, and if I’ve got a ton of stuff to do before that, nervousness starts to come up,” he explains. “The performing aspect is fun and easy, for me at least.”

Harding had quality mentors in the world of stage performance. His mother was a traveling gospel musician, singing at churches all over the country. Curtis had to be ready to jump on stage and accompany her at any moment. But by his teenage years, he discovered music beyond his Christian upbringing. Hanging around the Atlanta music scene (where the family eventually settled), he crossed paths with musicians like Outkast’s André Benjamin and CeeLo Green, who invited him to sing backup on tour. 2002’s Smokin’ Grooves tour found him on the road with The Roots, Lauryn Hill, Cypress Hill, and Outkast, seeing firsthand how to send an arena full of fans into happy hysterics.

In 2014, after honing his guitar and on-stage chops with rock group Night Sun, a collaboration with members of the Black Lips, he finally dedicated two weeks to recording his own original music. The resulting Soul Power made him a critic’s darling, hailed alongside Leon Bridges as the new face of soul music. But despite that album’s success, Harding entered a period of creative doldrums that he addresses on “Wednesday Morning Atonement,” the opening song on his follow up release, Face Your Fear. In it, he addresses his songs like children, who he’s come home to care for, embracing the second chance opportunity they’re giving him.

“I make music that I like, man. I have to like it, first and foremost,” Harding exclaims. “My goal in life has never been to be famous. I just need to pay the bills and continue to love what I do. If I’m going to make a song with a heavy beat, I’m going to do it because I wanted to do it.”

That echoes his mother’s approach. Music was her life, but her motivation lay beyond human desires. Playing and singing for the sake of music and worship shaped Harding’s approach today.

“Church is a good training ground for being a musician, across the board. You learn how to play with other people and jive,” Harding explains. “It’s an energy that you have to know — how to connect with people and connect with yourself, because first you’ve got to feel the vibes.”

Harding didn’t grow up wanting to be a professional musician, but once he reached working age, he found himself in a position to pursue it. Two decades in, the pieces keep falling into place for the 39-year-old.

“My wildest dreams are just to be happy, man,” Harding confesses. “I think that’s everybody’s wildest dream. Music makes me happy, and my friends and family make me happy, so in that sense, I’m on the way. I’m there sometimes. I’m just a normal person, man. I’m happy to make songs.”

That approach means that Harding doesn’t often sweat out club tours in the U.S. He’s from Atlanta and can’t recall having ever performed in Charleston, yet he’s a major draw in far-afield places like the Netherlands. Local roots and international appeal make Harding a sensible, and overdue, booking for Spoleto Festival USA.

“I’m over there playing major festivals, but the U.S. has been kind of slow to connect,” Harding admits. “But that’s fine, you know? Everything happens for a reason. We’ve been stacking them in there (Europe) for a while now. And then Shaky Knees hit me up, and then you guys (Spoleto) hit me up, so I was like, ‘Oh, wow, it must be coming long.’ So really, it’s great. I’m excited.”

The media in the last few days have been full of accolades about Justice Ruth Bader Ginsburg. None of the praise has been hyperbole. This diminutive woman was a giant for justice, never wavering in her commitment to justice for reproductive health care, pay equity, civil rights, access to health care, immigrants, nondiscrimination on the […]

COVID-19 updates: South Carolina health officials reported 393 cases of coronavirus on Monday, with 13 additional confirmed deaths. With 4,120 tests collected, the percent-positive rate was 9.5 percent. Monday marks the 14th-straight day South Carolina has reported under 1,000 new coronavirus cases in a single day, per The State. As of 5 p.m. Sept. 21, via S.C. Department of […]

COVID-19 updates: South Carolina health officials reported 393 cases of coronavirus on Monday, with 13 additional confirmed deaths. With 4,120 tests collected, the percent-positive rate was 9.5 percent. Monday marks the 14th-straight day South Carolina has reported under 1,000 new coronavirus cases in a single day, per The State. As of 5 p.m. Sept. 21, via S.C. Department […]