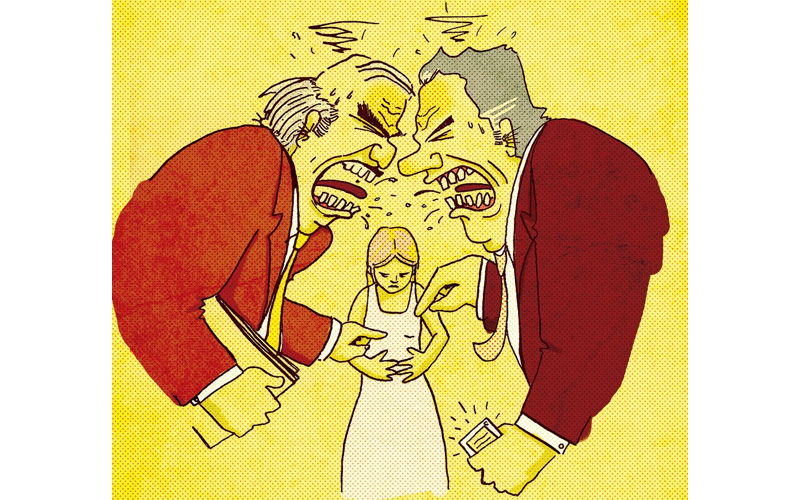 For 20 years, Lorraine Maguire worked at the Charleston Women’s Medical Center, currently one of only three abortion clinics in South Carolina. Starting out as a recovery room nurse in 1980, she went on to become director of the clinic and an advocate for a woman’s right to choose. But she says over the course of her time at the clinic, she also became a target.

According to Maguire, her neighbors would receive letters every Christmas saying that her family’s gifts were paid for with blood money. She says there were threats to protest her daughter’s high school graduation. One night she received a call from someone claiming that her daughter had been in a terrible car accident. The call proved to be false, but more and more the protests that took place outside the clinic would spill over into Maguire’s personal life.

“I was always the face out there, and I made myself a target. I did that because if they focused on me they didn’t focus on the women,” says Maguire, who regrets that more people don’t speak up for the local clinic, but she understands why many choose to remain silent. “When you do that, you risk not coming home to your family because people want to kill you. And that’s the bottom line.”

Last week, South Carolina lawmakers passed a bill banning abortions after 19 weeks. South Carolina Rep. Wendy Nanney, who sponsored the bill, told the Associated Press that she hopes the new law is one more step toward doing away with abortion altogether. Similar restrictions are currently in effect in a dozen other states, but legal challenges in Arizona, Georgia, and Idaho currently block the law’s enforcement.

The bill behind South Carolina’s proposed restriction states that there is strong evidence that an unborn child is capable of experiencing pain by 20 weeks post-fertilization, but those opposing the bill argue that it is a greater harm to women.

“This is a dangerous bill for South Carolina women that would ban abortion after 20 weeks, made even more extreme by removing exceptions for victims of rape and incest,” Alyssa Miller, South Carolina director of public affairs for Planned Parenthood South Atlantic, said in a statement. “The reality is that abortion later in pregnancy is extremely rare and often takes place in complex and difficult situations where a woman and her doctor need every medical option available. In states that have passed similar abortion bans, some women and their families have been put into unimaginable situations — needing to end a pregnancy for serious medical reasons, but unable to do so.”

Research presented by the Guttmacher Institute, a nonprofit that examines reproductive health issues and legislation, found that less than 2 percent of abortions performed annually take place after 20 weeks. Women receiving late-term abortions are more likely to be younger than other women seeking abortions and less likely to be employed. According to the S.C. Department of Health and Environmental Control, on average fewer than 30 abortions are performed at 20 weeks or later each year in the state.

“There are conditions that are not discovered or do not present themselves related to maternal and fetal health until after this point in pregnancy, so that is a concern,” says Elizabeth Nash, senior state issues associate with the Guttmacher Institute’s D.C. office. “Another concern is that because of other barriers, either legal or financial, women have generally made this decision and then they find themselves in a situation where they cannot pull together the funds or they have to go through some of the legal barriers that are in place like a waiting period, so they may end up having a later abortion then they really intended.”

According to Nash, the number of abortion providers in the U.S. has been decreasing since the early ’80s. This drop is attributed to the growing number of regulations on clinics and the violence associated with working as an abortion provider. The constant threat of harassment makes it difficult for clinics to hire new employees and find outside vendors willing to work with providers. A bill currently being considered by the S.C. House of Representatives would require providers to arrange for the burial or cremation of fetal tissue following an abortion, adding another series of regulations and forcing providers to locate a funeral home that will associate with a clinic.

“The idea here is to make it harder to provide abortion services because you’re essentially up-ending how clinics operate by requiring all tissue to be either buried or cremated,” says Nash. “It’s completely unclear if there’s a time frame associated with this. Do you have to do this every week? Do you do this every day or every procedure? It’s very murky in these kinds of requirements. And it is just as unclear exactly how the funeral home would be handling the requirement.”

As currently written, South Carolina’s version of the Unborn Infants Dignity Act borrows language from a model bill released by Americans United for Life, an anti-abortion advocacy group based in Washington, D.C. In a statement released by the organization, the group argues that the bill is a natural extension of laws on violence against unborn children, adding, “Unborn infants should not be disposed of as ‘medical waste’ when they die before birth, regardless of whether their deaths are spontaneous, accidental, or induced.” Starting this July, a similar law will take effect in Indiana, but Planned Parenthood and the ACLU have filed legal action against the state, claiming that new regulations present a costly burden for clinics and an added obstacle for women considering abortion.

“Women don’t go in to have an abortion blind. They put thought into it. They seek answers from whoever they feel they need to get answers from — their doctor, their minister, their husband, their boyfriend, their mother, whoever — and they reach the decision to terminate that pregnancy for whatever the reason might be. But that’s not my business,” says Maguire. “My business is to see that a woman gets the best possible medical care she can get and that she’s not going to some quack … that’s going to do a patch job on her and send her off like 50 years ago and maybe she makes it and maybe she doesn’t.”

She adds, “I had an abortion as a teenager before abortion was legal in South Carolina. And I can tell you that I was very fortunate. But there are a lot of women that weren’t. And I made a decision early on in my career as a nurse that that’s what I wanted to do. I wanted to help people. And that’s the path I chose, and I never have been sorry for it.”