After nearly 50 years, John Oates makes the past present 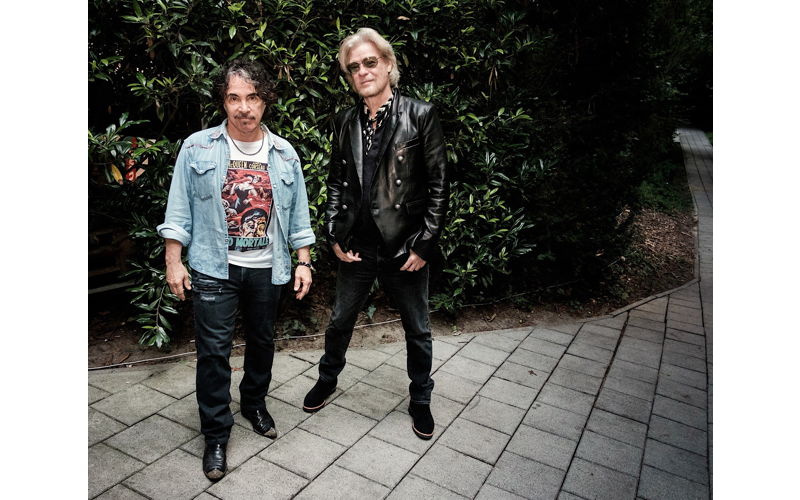 Man on a Mission

If you folded the performance power of Sam & Dave into the songwriting savvy of Lennon/McCartney, you would have a close approximation of how the soulful pop duo of Daryl Hall and John Oates has operated over the last five decades. To their credit, these two luminaries have collaborated on an assortment of adventurous studio albums, such as the Todd Rundgren-produced and critically-overlooked War Babies, and they have made their way along the touring circuit with everyone from David Bowie to Cheech & Chong. Still, there is a reason why they have never been known for their more experimental side, except within a small group of hardcore fans and famous friends (including Andy Warhol and Pierre La Roche). As John Oates explains during a recent phone conversation, “It’s because of the hits!”

“There were so many and they were so massive that they overshadowed everything else we ever did,” he says. He’s not exaggerating with that assessment, either. Among the staggering 34 songs to hit the Billboard Hot 100 charts are ubiquitous tunes, like “Kiss on My List,” “You Make My Dreams,” “Private Eyes,” “I Can’t Go for That (No Can Do),” and “Maneater.” And as Oates playfully points out, “they still turn up in movies, on the radio, and in television commercials 40 years later.”

The man who is, in part, responsible for all that great music is certainly not complaining about his commercial achievements or various hall of fame inductions. In fact, Oates readily admits that it is his overwhelming success early on that has allowed him to enjoy a late-career renaissance in which he doesn’t have to worry about making anyone, but himself, happy. To that end, he chooses to call Nashville home, and to run around with the who’s who of Americana musicians based there, when he is not working with his old pal Hall. His latest solo LP, Arkansas, it turns out, was recorded there and is intended to be a direct nod to Mississipi John Hurt, Johnny Cash, and Jerry Lee Lewis. It should be noted, though, that Oates’ infatuation with roots music is not some newfound diversion. “I grew up without musical borders,” he says. “I was into Chuck Berry, Little Richard, Elvis Presley, Son House, Brownie McGhee, Doc Watson, and the Temptations, all at the same time. To me, great music is great music, whatever else you want to call it.”

Surprisingly, to hear him tell the story, Oates’ star status didn’t get him very far when he first arrived on the scene in Music City, roughly 10 years ago. “Sam Bush befriended me, and that was all it took to flip the switch. I suddenly found myself surrounded by all the other A-list players in town.” He’s referring to master musicians like Jerry Douglas and Béla Fleck, with whom Oates has forged a bond.

While he was busy reinventing himself and his songcraft in the American South, Oates also found time to pen a best-selling memoir, Change of Seasons, that looks back at all the years that made him a legend in the first place. Besides the standard retrospective tale that you might expect, the narrative he constructs with co-author Chris Epting manages to delightfully veer off-course to share some of the surreal experiences Oates was subjected to while living next door to Hunter S. Thompson in Colorado and the circumstances that led to his fast friendship with George Harrison.

Incredibly, Oates says that he was introduced to the former Beatle, not by music business contacts, but by racecar driver Jackie Stewart, and they all bonded over a mutual love of Formula One. “Although I primarily knew him from that other context, George [Harrison] actually ended up joining us [Hall & Oates] in the studio one time when he was hanging around L.A.,” Oates reveals. “But it was only on the condition that he would simply get to be in the band, without receiving any special attention.”

Other unlikely alliances include Oates’ connection to the Grateful Dead that he claims was solidified over a 200-mile mountain bike trip through Montana with Bob Weir. As he’s talking about the recent task of pulling together similar stories for the book, Oates seems genuinely taken aback by everything that’s in there. “You know, the more I dug into the past for that project, the more my life opened up to me, and I kept wondering how so much could have possibly unfolded over the course of one single lifetime.”

When presented with the suggestion that he might also be the only person to have ever performed at both the Grand Ole Opry and the Apollo Theater, Oates thinks hard for a minute, and then jokingly asserts that, if true, he will have to update his résumé.

Fortunately, music lovers won’t have to rely on Oates’ written accounts to get a sense of what Hall & Oates are capable of as a live unit. This peerless pair of hitmakers is still out there making the rounds, year after year, showing younger generations exactly why they are one of the most celebrated duos in rock ‘n’ roll history.

For his part, Oates clearly relishes the longevity of his ongoing musical conversation with Hall, and he considers it “an honor and a joy” to continue to expand upon that ever-evolving dialogue in front of new audiences. “We’re extremely fortunate,” he says in conclusion, “to have created such a rich legacy of our own that still resonates with listeners, even after all this time.”