After 15 years, Dr. Dog revisits Psychedelic Swamp for a 2016 release 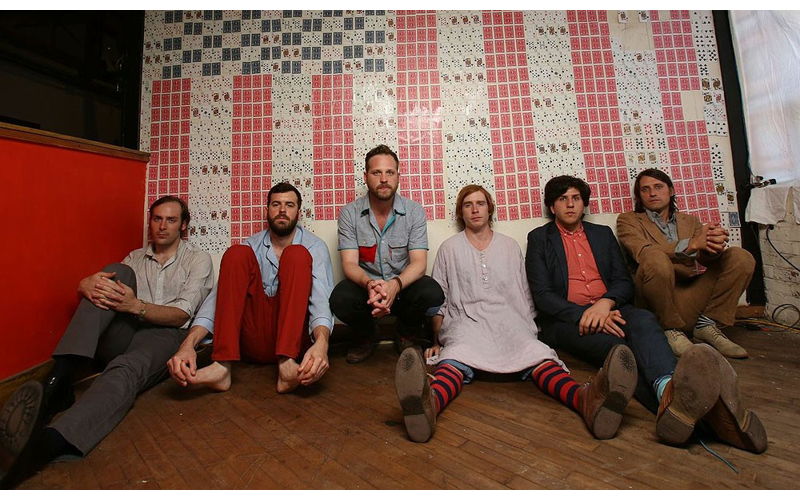 Philly’s Dr. Dog made their first record, Psychedelic Swamp, in 2000 but never officially released it. Sure, there’ve been bootlegs, and any long-time Dr. Dog diehard can list the LP’s songs — but the collection never got a chance to really shine. Now 15 years later, the album has gotten a complete makeover and will at last see the light of day in early 2016. “We just got masters back today,” bassist/songwriter/vocalist Toby Leaman told us last week. “And it rules.”

The strange thing is not that the band is returning to the first thing they ever created together, but that returning was their intention all the while. “The concept behind it is that we were always going to redo it and make it super-accessible pop, which was built into the concept of Psychedelic Swamp. Part of the original record that is so unlistenable is that,” he pauses to laugh, “it was trapped in a psychedelic swamp.”

“It’s really interesting,” he continues. “You’re almost treating your own songs like they’re cover songs, and it’s songs that we didn’t even really play live, so we didn’t have any real concept of what the arrangement would end up being like. And so much of the original recordings were just keyboard-based, and I don’t think there was any bass or drum on the whole first record. And this one, of course, has the whole studio treatment.”

While Psychedelic Swamp consists mostly of reinterpreted material, the band also found themselves creating new tracks inspired by the old ones. For instance, Leaman revisited “Engineer Says” only to find himself writing an entirely different tune. “I was trying to turn it into a major key and do some cool stuff with it, and I kept running up against the wall,” he says.

“Engineer Says” still made the cut, remaining largely the same as the original and becoming Leaman’s favorite track on the disc — apart from the song that “Engineer” inspired, “Bring My Baby Back.” “The song is utterly dissimilar in style,” he explains. “‘Engineer Says’ is a kind of slinky, upright bass, organ, kind of really harsh guitar song, and there’s some sax on it — sort of like a pulsing, swaggering beat. And then the other one is almost emo or something, with a pop wall of climbing vocals.”

Original member Doug O’Donnell, who hasn’t been in Dr. Dog since 2004, also returned to the compositions since it was he, Leaman, and Scott McMicken (lead guitarist/vocalist/songwriter) who originally recorded Psychedelic Swamp. “There’s a bunch of Doug’s songs on there, which is exciting because we haven’t recorded with him in so long and they’re songs we would never attempt to do without him for a myriad of reasons,” Leaman says. “There’s an instrumental one that’s more in the Beach Boys realm — oohs and ahs and Hawaiian-style guitar and block harmony and stuff. And there’s another one of his called ‘Golden Hind,’ which is this lyrically absurd tune, but it ended up sounding great. We ended up liking it so much it’s the first song on the record, which is weird because Doug’s singing it and he’s never been on any of our records — no one knows his voice.”

As for McMicken and Leaman, they’ve been in bands together since the eighth grade. So how have they been able to put up with each other’s shit for so long? “We both are kind of hands off on each other’s stuff to a degree,” Leaman says. “And usually I think everything he’s doing is great and he thinks everything I’m doing is great, so usually it’s not a problem. But when it does come up, we’re pretty honest with each other.”

Recently, Leaman had to fight for a song to make it on Psychedelic Swamp. “It sucks, but you gottta do it and vice versa,” he says. “And we do it for every record. There’s always something you kind of have to fight for, and something you have to let go of.”

But above all else, even band members shouldn’t go to bed mad at one other. “We don’t even let stuff simmer for a day,” Leaman says. “You can cuss each other out or push each other around or not talk to each other for hours, but you have to fix it immediately or else you’re wasting everybody’s time. There’s no reason to waste other people’s time because you can’t communicate — that’s kind of part of the deal.”