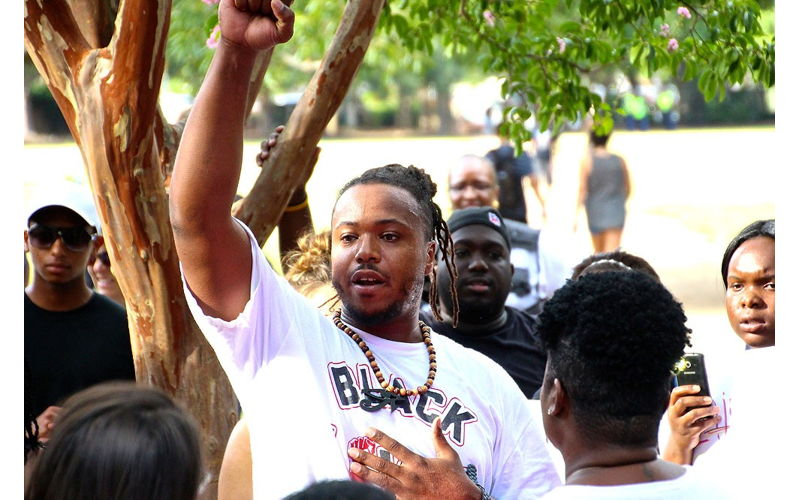 Before he leapt into everyone’s Twitter feeds by snatching a Confederate flag from protesters, local Black Lives Matter organizer Muhiyidin d’Baha had long been one of the Charleston area’s most vocal activists. With so many people hoping to get started in mobilizing others behind a cause, City Paper reached out to d’Baha for advice on how to effectively organize and address local problems.

Tip No. 1: The first one I think is most helpful is don’t prescribe unless you can describe. It’s really learning about how to describe the impact of a policy decision or the impact of a situation from a first-person perspective. If you can’t do it from a first-person perspective then don’t prescribe a solution because you could be actually exacerbating the problem and that might have unintended consequences in the future.

Building on Needs: The second part would be to build out of our needs, out of our real self needs. Centering folks on how a particular policy decision actually impacts them or people they know and then building solutions out of a felt need, so it’s grounded and real and it’s organic and natural and not conceptual and abstract. That’s really important because it gives us longevity to our work. We do a lot less talking and a lot more acting when it’s a real, felt need that we have or people that we know have.

Organizing: Organizing friend networks and leveraging social media connections is super important. It’s hard to overestimate how important it is in this age of organizing. If folks can literally identify 10 friends that they can bring to action or to protest or to a city council meeting and if we can have 100 people that can organize 10 of their friends and those 10 friends can come out, then we have a reliable base of 1,000 people in town that can show up to support.

Awareness: What we’re trying to move from is an awareness-raising element because we’ve already developed that. That’s really important for folks to understand. While they might be activated because of other people who have already organized and raised their awareness, we don’t need more people to raise awareness. We need more people to start working on actually developing solutions and organizing our presence within spaces where decisions are made. We need a little less demonstration that’s built around awareness raising and much more strategic organizing that’s actually influencing the halls of the power and influencing the discourses, the public discourse in particular.

Natives: Another element, especially down here, is that we want to have organizing that centers natives, that centers people that have lived in Charleston. One of the things that I’m experiencing and I’m really disturbed by right now is just how many people who aren’t from here are shaping the public discourse and are shaping the public policy. There are conversations that people that have lived here haven’t been able to have, even between each other yet. The segregated schools, for instance, that existed way before there was a real estate boom in Charleston and way before gentrification really picked up at the pace it is now. So there’s still a conversation that the native community has to have to resolve and to create a solid foundation so we don’t replicate some of the sourness that might be in the soil.

Centering Voices: The centering of women’s voices is absolutely critical. Down here, men dominate the religious space. Men dominate the political space and the activist space so much of the time that what are identified as “community leaders” are men, so we’re really trying to be intentional about uplifting — especially women of color and especially trans and queer women of color to really offer their voice. Anybody who’s organizing has to be conscious of not replicating the same kind of patriarchy and the marginalization of women’s voices that’s been going.

Neighborhoods: At a neighborhood base level is where organizing happens. Where you live and the neighborhood association and what’s happening in your geographic location, in your neighborhood school, those are the spaces that we need a lot more organizing happening. It’s not helpful to have a bunch of people coming from a bunch of different places coming together and one person being recognized as the leader of this amorphous, nebulous group that really doesn’t have any long-lasting and sustainable ties to each other because they don’t live near each other. I guess the moral of the story there is to do neighborhood-based organizing and don’t do such so much issue-based organizing.

Communicate: I think community communication across front lines is super critical. Developing it so the community calendar just focuses on social action in community organizing is absolutely necessary, and we need as many people’s help as possible to uplift some of the tools we have. Charleston GOOD (an online grassroots incubator and media outlet) actually has a community-building calendar embedded into it that we utilize a lot.

Collaboration: The recommendation is that instead of everybody organizing their own events for their own specific issues, we look at a weekend and we look at a Saturday from 8 a.m. to 8 p.m. We figure out a location where we can all go, and we all take one or two hours for our specific issue and we spend a day together listening to each other, organizing each other, leveraging and sharing resources, so folks don’t keep on replicating the same kind of dynamics where the people that have the most money or access to the most money are able to get heard the most. If we create platforms that are collaborative, then we can eliminate some of those dynamics.

Online vs. Reality: What we’re doing is we’re exploring a new way of communicating and a new way of organizing in which we organize virtually. We want to express in physical reality then we want to bring that expression back into virtual reality to reflect on and to have that generate some more energy so we can express it in physical reality. There is a dance there that we’re learning how to do so we don’t get caught up in the social media world because in the social media world we can have 3,500 people that are coming to an event and we can have 100,000 people that have watched a video. But when it comes to a city council meeting to actually push the work forward, it’s hard getting people to come out.

Final Tip: Make sure that you’re paying young people, especially high schoolers, to do your canvassing and to do your social media engagement. I can’t emphasize that enough. Make sure you pay young people to do community engagement because they’ll do it so much better than any of us.

A Charleston Guide to Protesting