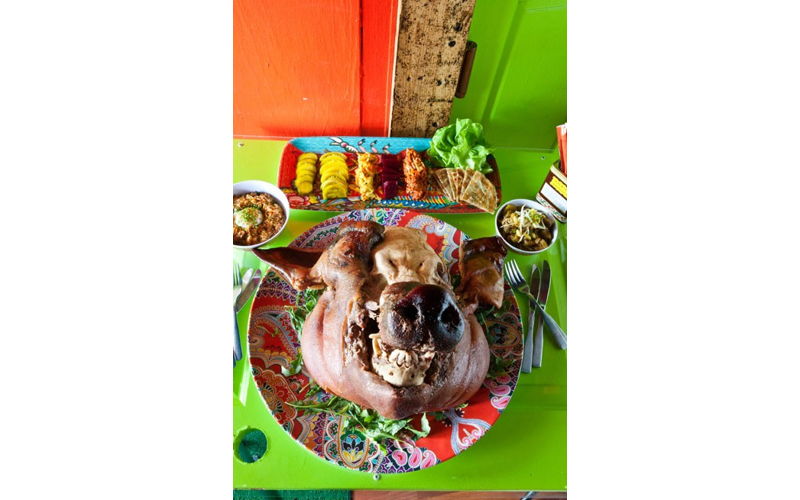 Going off-menu is like unlocking a secret level of dining out. It means you’ve cracked the cheat code and have discovered an alternate universe that the food and beverage community tends to keep to itself. Going off-menu is something that happens to serious diners. It’s a chef recognizing a patron’s passion and rewarding them with a treat that he’s got back in the kitchen or providing a customized tasting menu that no one else can get.

Just dining at the Green Door is akin to going off-menu. The tiny restaurant on East Bay Street is unmarked and somewhat hidden, but it’s attracted a loyal following already. Chef Cory Burke, who got his start with the popular food truck Roti Rolls, says, “That was kind of the vision when we started. Keep it low-key and low profile, not have a genre, and be a place where people who are into food can stop by and see what’s going on.”

And what’s going on these days are Saam dinners, modeled after traditional Korean family-style meals but with a Green Door spin. You can get whole fish, a beef shank, braised short rib, whole chickens, and — most dramatically — an entire braised pig head. That’s right. A pig head. Which begs the question, why would anyone want to have their dinner staring up at them from the plate?

“It’s about respect for the animal,” says Burke. “You killed it and now you should eat the whole thing. That’s the direction we’re going with at the Green Door with using the whole animal.”

Ordering the pig head requires a 24-hour notice. Burke gets them from Bev Eggleston at EcoFriendly Foods in Virginia or Gra Moore at Carolina Heritage Farm in Pamplico, S.C. Once they arrive, he rubs them with house seasoning. “It’s basically a bunch of brown sugar, salt, cardamom, cumin, fennel, chili flakes, garlic and onion powders. We rub it inside and out and let it sit in the fridge for two days, and then we braise it from there. The braising liquid is ginger ale, soy, and we reuse it. We’re on fifth generation braises, which gives you even more delicious pork fat.”

The pig requires a cadre of eaters, between four and eight, depending on the size of the head. A group of diners once arrived bearing tools to break down the beast, but Burke says those were serious chefs who wanted to really dig in. He promises that the kitchen will come out and peel back the skin and the fat for you if you’re uncomfortable and help uncover the tasty morsels that lie beneath. “You have to go in with your hands and dig in to get that really nice succulent meat — jowls, cheeks, the meat behind the eyeball. Pigs chew all day long so anything on that jaw is super delicious.”

His biggest advice is to lay claim to one of the eyeballs. “They taste like a gamier pork belly, that texture. They’re not like a fish eyeball that pops in your mouth. These are like a tougher meatball, and they are delicious.”

Burke himself hasn’t had many opportunities to go off-menu, but he vividly remembers one instance. “It was at a sushi place in Boston. They did have something not on the menu, a whole live lobster that they brought out on a butcher platter, still squirming, and stabbed it in the head in front you. That was pretty cool.”

Sushi restaurants are famous for providing customers the omakase option. The word translates to, “I”ll leave it to you,” and signals to the chef that you are up for anything. It provides him an opportunity to create an artistic progression of dishes. It’s best to do this with a chef who’s familiar with your preferences. In Charleston, one of the most respected sushi chefs is Sean Park, who recently took ownership of Kanpai in Mt. Pleasant.

“Tell me what you like, and I can tell you who you are,” says Park, who saves the omakase for regular customers. “You’ve got to have at least a certain amount of relationship to trust each other. I have to get to know you.”

The sushi master wants to cater to you, to fulfill your cravings and satisfy your dreams. He can’t do that if you’ve never sat down to the sushi bar and eaten in front of him.

“So many times I say, no omakase. Sorry, you have to plan ahead and come here and eat a little bit, and you have to make a reservation. I don’t just go ahead and do it. I can do it. I can make it up, but I don’t like it that way. I don’t feel confident, and I don’t think the customer deserves that. I can improvise, I’ve been doing this 20 years, but I like to prepare a list two or three days before so I can order ingredients and make a special sauce.”

As soon as Park agrees to omakase, he will call all over the country — Hawaii, Atlanta, the West Coast — to get his hands on the best fish he can find. He will also ask for your preferences, whether you like uni or toro, whether you prefer East or West.

“In many ways, he or she is going to get the best of the best from me for that day, so I love it,” Park says. “But without trust, it’s not going to happen.”

Trust is an issue that comes into play over at Xiao Bao Biscuit too. Diners have quickly learned to trust XBB to provide exotic dishes that don’t skimp on heat or flavor. The chef is in control here, not the customer. The menu disclaimer sums it up: “Our dishes have been carefully crafted to be enjoyed as is. No substitutions please!”

The unfamiliar food and the minimal menu descriptions barely give a hint of what to expect when the dishes arrive at the table. Spicy sichuan tofu in chili oil sounds hot, but when the Mapo Dofou arrives and you’re halfway through the bowl and the sweat is beading and the water glass is being constantly refilled, you learn to trust the skill and the dedication that went into making such a thing. It makes you want to try more. Adventurous diners quickly key in on the offering of family-style, 48-hour-advance-notice dinners, mentioned almost in passing on the bottom of the menu.

Chef Joshua Walker decides what they might serve based on availability and XBB’s own interests. “We’ve done everything from whole bulgogi-style brisket and kimchi pa jun (Korean inspired) to whole steamed chicken with black bean ginger sauce and garlic greens (Chinese) to a Thai rack of ribs Kraduk Muu Tod with our shao bing biscuits.”

They also do whole fish preparations. “We love steamed whole fish in more of a Thai or Japanese style, with larger red snapper or bass,” says Walker. “We love grilled fish with Laotian jeow, an almost salsa-like condiment, for smaller pink snappers, and we love fried fish in a Chinese or Vietnamese style with trigger, grunt, or even flounder.”

It’s up to them. But taking off on the adventure is up to you. Should you accept the challenge, you will be greatly rewarded. Trust us.