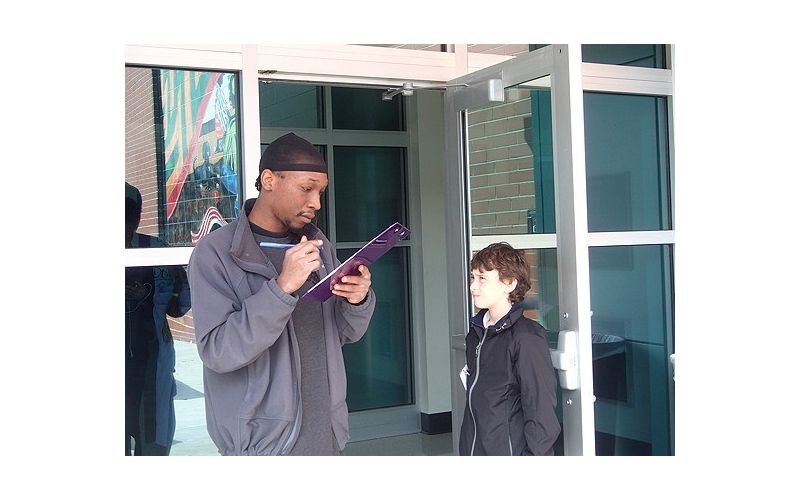 If you want to get a good prediction of who’s winning the elections in Charleston County, ask a grade-school student.

Specifically, ask one of the students at the University School of the Lowcountry, an independent nonprofit school (grades 3-8) that conducts exit polls every year. Last year, for example, they accurately predicted Charleston Mayor Joseph P. Riley Jr.’s landslide re-election victory, and in 2010, they correctly picked Craig Ascue and Elizabeth Moffly to win two seats on the Charleston County school board.

The University School, which meets on the campus of Hibben United Methodist Church in Mt. Pleasant, is a distinctive place, and not just because the students don’t get Election Day off. All of the students are required to job-shadow once a year, and they all learn Mandarin, Latin, and Spanish. When they go on field trips, they go on serious field trips ­— whether to hear New York Times columnist Nicholas Kristof speak about women’s rights in the developing world or to run an honest-to-goodness exit poll.

This year, the students fanned out to 20 polling sites, seeking to get 100 responses at each site to a paper survey. Aiming for a sample size of 2,000, they hoped to make an educated prediction of the outcome.

Clayton Johnson approaches exit polling like a football season. A win occurs when one of the voters at the Mt. Pleasant Municipal Complex fills out a survey. A loss is when they ignore him, or politely refuse. His competition is himself. Clayton’s goal is to get at least 10 people to fill out his sheets of paper, and a half-hour into his exit polling, he’s got a 3-3 record so far. That’s not bad, he thinks. He could still get a bowl game.

A 14-year-old eighth grader at the University School, It’ll be another four years before Clayton will get to vote himself, just in time for the 2016 presidential election. If he has his way, that’s when he’ll be re-electing President Romney. Clayton leans right, like many of the older white folks that seem to make up the demographics of this precinct. He cares about taxes, since his family pays a lot of them. His father is a doctor, so Obamacare is a major issue in his household. But even more personally, when Clayton grows up, he wants to go to West Point and get a job in the military. He needs a president who cares about foreign policy. “I like [the Republicans] better than what the Democrats say on it, like smaller government instead of bigger government,” he says. “I’d say I’m a Republican because I don’t quite agree with the Democrats’ standpoint on it, or the Libertarians.”

Now in his fifth election and second presidential one, Clayton is an old pro at exit polling. “How we do it here, we basically ask people who they voted for and why they voted for them,” he says. “We don’t try to do a whole lot of specific questions, just because it could be considered push polling or maybe leaning people towards not voting for certain people, so it’s basically yes or no questions except with names and check-in boxes.” Clayton’s teacher, Heather Connelly, says the University School students have been prepping for this election since the last school year. “I think they’re learning a lot about how polls are taken and statistics, and they know a lot about the political process and a lot about the candidates who are running,” she says. “Some of them don’t enjoy it as much as others … but they definitely know a lot more than a lot of adults that I know.”

According to Clayton, the best way to approach a voter is to introduce yourself, then explain where you’re from and what you’re doing — and make sure you state you’re non-partisan. The kids wear nametags with the name of the school and an explanation of who they are, which helps. Clayton’s got the most professional manner of the bunch. He’s assertive, targeting a voter, introducing himself, possibly with a handshake, and smartly emphasizing the fact that it’s a one-page survey. “I personally think that if you shake someone’s hand, they’ll probably think that’s a good thing,” he says. And Clayton has a great grip.

There’s certainly more voters here today than in Clayton’s past non-presidential experiences, which makes the exit polling easier. People may respond to the pollsters based on a particular student’s age or how excited they look and what approach they take, Clayton believes. He thinks the littler kids have an easier time at it — at least, that’s how it went when he was younger — but Natalie, an 8-year-old third grader, isn’t having a good go at it. One voter, on his way out past her, plainly tells Natalie she needs to be more forceful when he refuses her request to participate. When he’s gone, her chaperone whispers that the man’s just grouchy.

Mt. Pleasant Municipal Complex is, almost exclusively, a polling place for white people. The number of minority voters coming through the doors can be counted on one hand. Flipping through the filled-out polling surveys, Romney seems to be in the lead, but there are plenty of Obama votes, and even one Libertarian ticket. Most people chose to fill out their anonymous answers to the “Why?” question. Romney answers are varied: “Because I like him.” “Limited government/great hair.” “Afraid of Obama.” “Need you ask?” One Obama voter swayed Democratic because they “can’t stand Romney.”

After about an hour, the University School group is about to run out of polling sheets. They want to fill out 100 surveys before moving onto their next stop, the Democratic-leaning St. John’s High School on Johns Island, and Clayton’s self-imposed competition is neck and neck with nine polls and nine rejections. He’s a little nervous and leaves the room to rehydrate at a water fountain, hoping that’ll improve his odds. But a last woman is easily swayed, and Clayton does a touchdown dance to celebrate. The woman, busy with the survey, doesn’t notice.

When all the polling sheets are accounted for this afternoon, Clayton and the other students will return to the University School to tally the votes. They’ll send their results out to the community — and to media outlets like the City Paper, who will use the data in its reporting on the election. Clayton admits it’s really special knowing that adults will be using the information that he and his classmates gathered. “It’s fun to know that we’re actually doing something, and then also using it for our school,” he says. “It’s interesting and then if you kind of take a step back and think we’re students exit-polling, it’s being used by newspapers, it’s pretty cool.”

Clayton’s already a winner today, but it’s too early to tell for his preferred presidential nominee. His family has plans to watch the election results tonight. “I know it’s going to be close,” he says. “I’m not really sure. I mean, obviously I hope Romney wins, but there’s really no way to tell at this point. It’s a toss-up. It’s going to be exciting tonight.”

Blue on the Eastside

Judging from the exit polls, the Eastside polling location at Sanders-Clyde Elementary School is squarely in Obama territory. Around noon on Election Day, three young boys sit on the steps behind the school and ask passersby how they plan to cast their ballot. Before they get a response, they blurt out, “Barack Obama. He’s winning, you know.”

The University School pollsters who worked the doors at Sanders-Clyde had started their morning at the more Republican-leaning Jones Recreation Center polling location in Mt. Pleasant. They knew what to expect, more or less.

“Mt. Pleasant people that seem older generally vote for Republicans, and younger people and generally African-Americans vote for Democrats,” says Sophie Mauerhan, an eighth-grader who is working the polls for her third year. Sophie tends toward Democratic views herself, and she says her parents are divided on the issue — one liberal, one conservative. “They just don’t really bring it up,” she says.

At Sanders-Clyde, she says, about one out of every 10 voters declined to take the survey, a better response rate than at the Jones Center, where early-morning voters were sometimes in a rush to get to work. The students got their 100 survey responses within an hour at Sanders-Clyde, bracing themselves and clinging to their clipboards against a bitter-cold wind that howled down the sidewalk. From here, they’ve got to head back to class, tabulate the responses, and make a prediction about winners and losers.

The students are abnormally polite and well-spoken, sometimes espousing more nuanced political views than the grown-ups they are here to poll. One of the students, India Manigault, would be voting for Barack Obama this year if she were old enough. “I like that he supports the right to choose if you want to have an abortion and the right to gay marriage,” she explains.

Compare that to the responses they’ve gotten so far on the surveys. In the one open-ended question on the survey, voters were asked to explain the reasoning behind their presidential pick. Some of the pro-Obama answers: “He’s doing a good job.” “Obama is the best :).”

“Hold on,” Sophie says, digging through the stacks of survey responses. “We’re finding you the good one.” She explains that a woman who looked to be in her late-20s handed in the paper and said, “Don’t be offended by what I wrote.” Her written response? “Because Mitt Romney is a crooked, greedy businessman who wants to wage war on women, gays, minorities, and the middle class.”

In preparation for this day, the students have learned about the electoral college, the hot-button issues of the presidential race, and even the candidates’ vastly different upbringings. At some point, they found out that as a teenager, Obama hung out with a group of kids who called themselves the Choom Gang. “It’s pretty much a gang where they would smoke marijuana,” one of the students pipes up. “That’s all they told us.”

Any dirt on Romney? “There’s nothing really interesting,” Sophie says.

But Sophie doesn’t hold Obama’s past against him either. “I kind of thought it made him better, because he was like everybody else in Hawaii at that time, but he got over it,” she says.