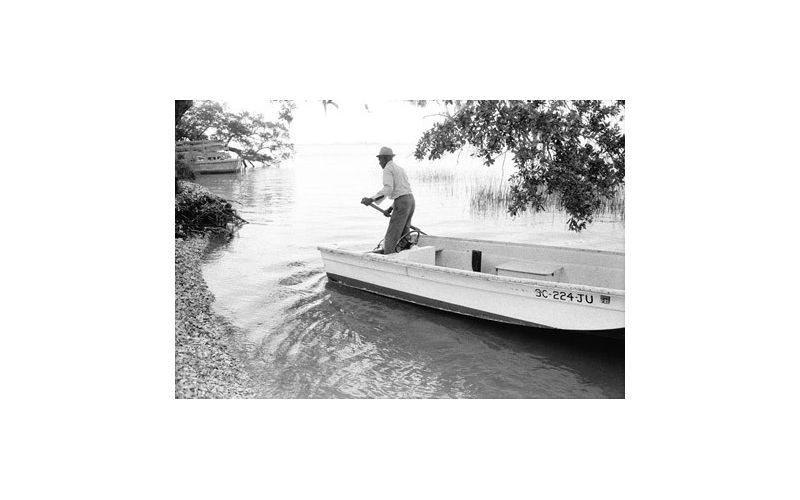 Hold onto a concert stub long enough and it will become a collector’s item, an artifact, a souvenir of an irretrievable time. An old 10-cent comic book can sell for thousands if it’s preserved long enough. Hold on a few decades and your faded, hastily taken holiday snaps can transform into important historical documents. That picture you took of Auntie Joan flashing her knickers at the Christmas party might end up in an art museum one day.

Daufuskie Island has changed over the past 25 years. Tourism has swamped the sea islands and real estate development has gobbled up much of its countryside. In the late ’70s, Daufuskie was still waking up from its reverie of isolation and Gullah tradition. Jeanne Moutoussamy-Ashe, a photojournalist and fine art photographer, documented that period in unembellished black and white. Over a four-year period she shot broken-down buildings, ferry crossings, religious ceremonies, and folk in their homes. She compiled them in a book called Daufuskie Island: A Photographic Essay. Now an anniversary edition has been released, with a touring exhibition to accompany the expanded publication.

At the Gibbes, the show is split into three parts: people, work, and tradition. Sweep your eyes along the walls and it’s like watching a documentary, gradually unspooling the life of the islanders. All ages are covered, from childhood (“Mary Fields Elementary School at Recess”) through marriage (“Saying ‘I Do'”) to death (“Lavinia ‘Blossum’ Robinson’s Funeral”). The images aren’t always perfectly composed, and some of them are so dark that it’s hard to make out important details. But Moutoussamy-Ashe always seems to catch her subjects in honest, uncontrived moments.

In “A young man reflects on his day as he goes home,” the subject is in the foreground, dressed in a pinstripe suit with the apparent weight of the world on his shoulders. Similarly, “Riding in a car with no windows” shows a tired woman whose long day is written on her wrinkled face.

Some of these exhibits are little more than snapshots, with little to recommend them beyond their age and irrevocable subject matter; since the photos were taken, the older people have passed away and several of the properties have been sold off. Moutoussamy-Ashe’s greatest accomplishment was to show the islanders’ quirks and everyday traits: a bride in slippers, a woman cleaning crab on her porch, families with their dynamite ’70s fashions, Blossum before her death. These glimpses of humanity make this exhibition far more than just a document of a lost era.

David Bowie’s fictionalized brush with fame in Stardust is mediocre at best Compared to some friends, my knowledge of David Bowie’s music is fairly limited. I like his hits, but it was seeing his films The Hunger, Labyrinth and The Man Who Fell to Earth that piqued my interest in him. The other day, I […]