A new ice cream venture gets creative with flavors 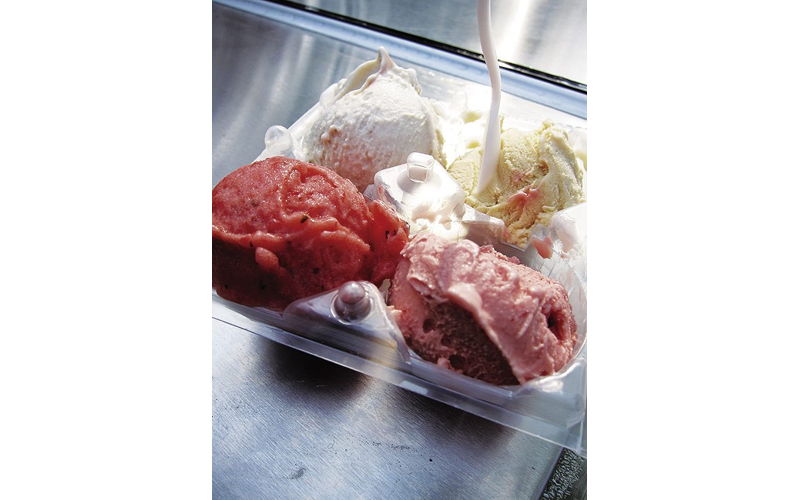 Charlestonians are buzzing about Roots Ice Cream — and it’s not just because we’re jacked up on flavors like “Coffee and Cigarettes.” Founded by young entrepreneurs Drew Harrison and Matt Frye, Roots takes the ice cream truck to a modern, locavore level with slick branding, locally sourced ingredients, and inspired, sometimes risky flavors like strawberry/cilantro, beet, crème brûlée/hushpuppy, and the aforementioned eye opener, a spicy blend of coffee and tobacco flavors.

After a showing at the Charleston Wine + Food Festival, Roots had its official debut at the farmers market in Marion Square on April 9. Set up with a small cart underneath the trees at the far end of the park, the duo sold small-scoop samplers for $4 and they sold out before 1 p.m. Just a few hours later they were at Kulture Klash hawking a whole new cooler of flavors specifically inspired by the event — the champagne Kool-Aid was gone by midnight.

It’s that unbridled energy and passion for their work that will hopefully keep Roots scooping for a long time. They’ve come a long way since finding inspiration in a field of peas last summer. As Frye tells it, he was working as an apprentice with Lowcountry Local First’s Growing New Farmers program. When he tasted a sweet pea straight from the vine at Thornhill Farms, he thought about how delicious it would be with a little cream and sugar. He started brainstorming other potential flavor bases — beets, figs, sweet potatoes, muscadines, basil — and decided to put his Peace Corps plans on hold to try his hand at the ice cream business. He soon teamed up with Harrison, who would handle the business side of the operation. From there, all it took was getting their recipe right.

Frye experimented with the recipes of top pastry chefs and took the week-long Penn State Ice Cream Short Course. Then he really started refining the flavors. “I search for a flavor that is very delicate,” Frye says. “I try to pay homage to the quality of our ingredient by not messing with its flavor that much. Our ice cream is a celebration of our produce, not a celebration of what we do to the produce. As Charlie Trotter said, ‘How does one improve on the perfection of tree-ripened, flawless peaches or apricots? We can only hope to step aside and let them sing.'”

There seems to be nothing Frye won’t try, making Harrison refer to his partner as a “mad scientist” in the kitchen. Although most of the recipes are solid after two or three tries, there have been a few admitted failures.

“At Kulture Klash, I really wanted to make a Pabst Blue Ribbon sorbet or ice cream. I reduced PBR with coriander and ginger. It tasted terrible. It ended up spilling in my fridge as well. It’s scared me from beer ice creams for a bit, but I’m excited to try again. Most beer ice creams I have had so far are more novelties. I wouldn’t come back and get that same flavor. So I’m eager to try and make a good one.”

Frye and Harrison are currently renting kitchen space in a West Ashley co-op, making ice cream at night while they still have day jobs. Their plan is to make an impact at local farmers markets and events first, and eventually have a retrofitted ice cream truck that delivers ice cream CSAs. One day, they hope to have their own storefront and a farm where they grow all of their ingredients. But no matter what, they intend to maintain their small-scale focus.

“The great thing about being a gourmet, local, and seasonal ice cream company is that everything is hand-made and small batch,” Harrison says. “So the sky is the limit with concocting flavors, so we’ll always have some new and exciting stuff on the menu.”