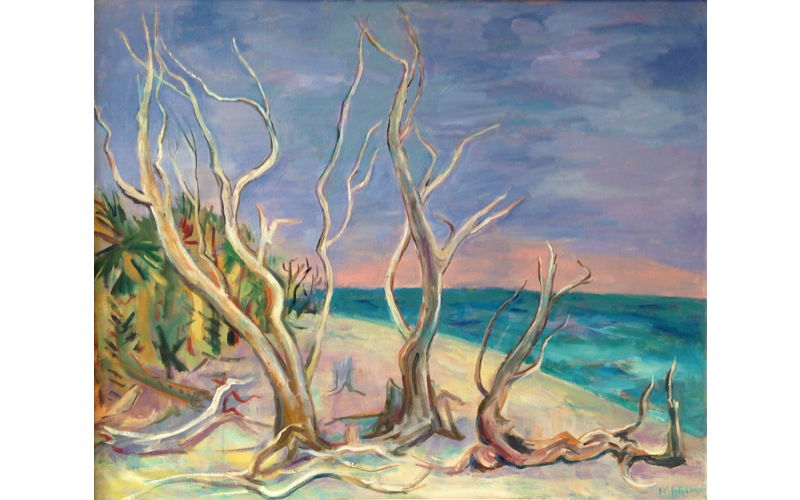 The imprint that the late Corrie McCallum left on Charleston’s arts community is a big one. In addition to being a skilled artist working primarily in printmaking and painting, the Sumter-born McCallum was passionate about arts education.

She also worked in arts education at the Telfair Museum of Art, the Gibbes Museum of Art, the College of Charleston (where she helped found the college’s Fine Art Print Dept.), and Newberry College. In fact, McCallum and Halsey’s influence was such that in 2018, Mayor Tecklenburg declared March 14th “William Halsey and Corrie McCallum Day.”

But for Lese Corrigan, both an artist and owner of the Corrigan Gallery, McCallum still doesn’t get all of the appreciation she deserves.

“She was a trailblazer,” Corrigan says. “She was so broadly versed, much more in my mind than William was. I don’t know that the community knows or understands that. And she showed that yes, a woman can be a mother and a teacher and an artist. Corrie was very much a believer that, as artists, teachers and mothers, that women could be a power and move forward and not let anything get in their way. She deserves a great deal more admiration, respect, and acknowledgement than she’s gotten along the way.”

Perhaps one of the reasons that Corrigan feels so strongly is that McCallum (along with Halsey) encouraged her when she was a young artist developing her painting, sculpting, and print-making skills.

“As I was developing my career, they were very kind and receptive about assisting young artists and making suggestions,” she says. “I could take a piece over to them and get a reaction and input from them. I felt that they were the living current bridge between the Charleston renaissance artists and those of us coming up.”

Time will tell if McCallum’s legacy gains even more respect than it has now, but in the meantime, Corrigan is putting her mentor’s work front and center with a new exhibition at her gallery called Celebrating Corrie McCallum. The exhibition concentrates on McCallum’s paintings, a milieu that typically doesn’t get as much attention as her printmaking.

“In the past, a lot of the focus has been on the work she did on paper, because she was such a prolific printmaker,” Corrigan says. “We have some of her print work that will be in another room, so that people can see the comparison.”

During her lifetime, McCallum moved from largely representational work to a more abstract approach, working striking colors and dreamlike images into her paintings. Her creations are so vibrant that Corrigan has a phrase for them.

The exhibition features McCallum’s work post-retirement because unfortunately, there is little left from McCallum’s early work. Those paintings would presumably provide a look at the artist’s evolution, but Corrigan has an idea about where McCallum’s early style came from.

“She started out as a medical illustrator, which is very specific and concrete by definition,” she says. “So even in her late period, she would leave you with the concrete in a sort of dreamlike state.”

Corrigan had access to McCallum’s work through a very direct connection.

“I handled the work that her youngest daughter inherited from the estate,” she says. “I looked at what we could get to and get here and put them into frames.”

Corrigan says she hopes that this deep dive into McCallum’s lesser-known work will give people a different perspective on the great artist, and maybe make them feel her presence a little more in the modern Charleston arts world.

“It’s easy for a viewer to get lost in these paintings,” she says. “We put them up to say, ‘Here she is, she’s still speaking to us.”