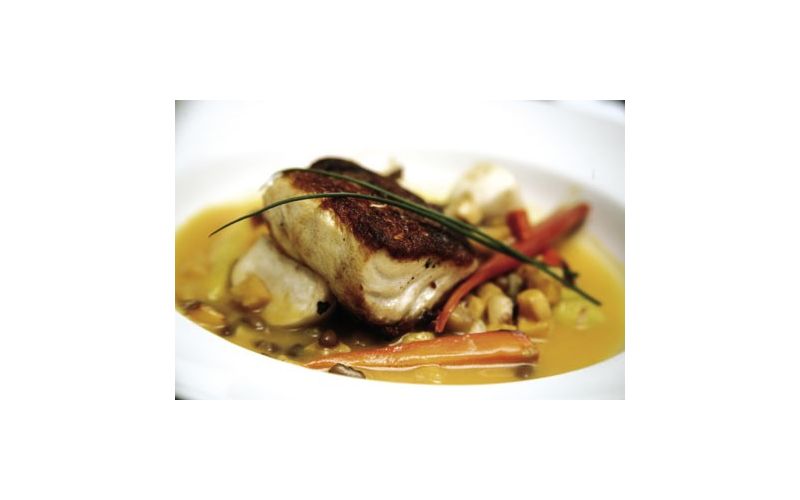 Lana is one of the hidden gems in Charleston’s rich dining world. It’s on Rutledge Street in the Elliotborough neighborhood, which is a little off the beaten path, but the restored storefront holds a small, beautiful dining room. Inside you’ll find Mediterranean-inspired meals that are simultaneously elegant and comforting — a very rare combination.

The moderately-priced menu offers a tour around Southern Europe, including dishes from Spain, France, Italy, and Greece. From start to finish, the focus is on fresh ingredients and well-executed preparations, and even the most seemingly ordinary offerings hold lots of surprises.

The spanakopita appetizer ($9.50) adds ground lamb to the traditional spinach, and it’s a welcome improvement. The savory mixture — more lamb than greens — is rolled into phyllo dough cylinders and baked until crispy and brown. Sliced into four angular pieces and positioned around a pool of creamy tzatziki and little mounds of tomato-mint relish, it makes for both an attractive plate and a delicious starter.

We’re seeing more and more housemade charcuterie on Charleston menus these days, but for my money Lana’s housemade country-style pâté ($11.50) is still the best in the city. It’s a dense, rich loaf that’s rimmed with bacon and studded with pistachios and other savory bits. Two generous portions are served on a big slab of granite along with a spicy Dijon mustard, toast points, and a red onion marmalade that packs a big zing.

Lana’s salads are also noteworthy. One striking thing about them is their interplay of both textures and temperatures. The pear and gorgonzola salad ($8.50) blends field greens with toasted walnuts, gorgonzola cheese, and pears in a tangy vinaigrette. The combination of a strong, creamy cheese with crispy nuts and bitterish greens is hardly unusual, but the pears — stained a deep red after being poached in wine and then chilled — are served cold amid the room-temperature greens and nuts, and they really set things off with both their sweetness and their temperature. The cold artichoke hearts in the Village Salad ($9.50) provide a similar temperature contrast, giving a cool, subtle base against the brighter flavors of tomatoes, olives, and feta. This specialty of the house is served with crisp pieces of grilled flatbread over the top and is a delightful way to prepare for the entrée.

Chef John Ondo is a proponent of serving sustainable local fish, and Lana’s menu features fire-roasted red snapper ($24) and a sautéed flounder with butter beans, corn, and orzo ($23), along with daily specials of whatever’s fresh from South Carolina’s waters. The pasta menu includes two types of gnocchi, one with broccoli and sausage ($12.50 small/$15 large) and another with pancetta and mushroom cream ($13/$15.50), and the risotto selection changes daily.

For a heartier meal, the duck ($22) is hard to beat. A crispy leg confit is surrounded by a fan of duck breast slices and served over a delightful bed of vegetables that include peas, carrots, mushrooms, and zucchini. This is duck in all its glory: crisp golden skin, tender meat, and the complex richness you can only get from duck fat. The vegetable medley is a perfect accompaniment, with little quarter-inch cubes of smoky bacon studding the mix and a delightful plum glaze underlying it all.

At first glance, roast chicken may seem a weak option when lined up against powerful temptations like the braised lamb shank with Sicilian couscous ($22) or a big grilled ribeye ($24). But Lana’s Basque-style pan-roasted chicken ($16.50) may actually be the best entrée on the menu. It’s seared a crispy brown and loaded up with sautéed peppers, onions, and prosciutto along with a fragrant white wine sauce. Like the duck, it’s served over a layer of sautéed vegetables, and the delightful capper is a trio of crisp, fluffy potato croquettes that garnish the plate. It’s an ideal blend of the elegant and the comfortable.

It wouldn’t be right to end such a classy evening without lingering over dessert, and Lana’s options include housemade gelato and sorbet in a dozen flavors, including sampler selections ($6.95) for those who can’t make up their minds. The piece de resistance for me is the sublime tartufo ($6.95), a classic Italian concoction that rolls an orb of hazelnut gelato in crispy chocolate and combines it with a splash of espresso.

Speaking of espresso, owner and general manager Drazen Romic has been said to brew the best demitasse in town, a reputation he started earning back when he ran the original Café Lana on Cumberland Street. Romic moved out of that tiny spot in 2005 and paired up with Ondo to open Lana Restaurant & Bar in its current location.

Ondo is a veteran of some of Charleston’s most respected kitchens, including McCrady’s, Fulton Five, and Il Cortile del Re, and much of his menu has been inspired by his travels in Italy. Through his work at Lana, Ondo has steadily been making a name for himself in local culinary circles. This past March he teamed up with John Currence of Oxford, Mississippi’s City Grocery to score a win in the Iron Chef competition at the Charleston Wine + Food Festival.

Ondo has started to rotate his fixed-priced tasting menu every two weeks to highlight the cuisine of a different Mediterranean region. Recent menus have featured traditional offerings from Spain (including paella, steamed clams, and marmitako, a classic Basque tuna and potato stew) and France (including onion soup, pork trotters, and steak au poivre). At just $33 for three courses, it’s not only a chance to explore something a little outside the ordinary but a real value, too.

All in all, Lana is one of those places where the proprietors do things on their own terms and focus on getting it right. With Hominy Grill on one opposite corner and Fuel on another, the intersection of Rutledge and Cannon has become the insiders’ destination for high-quality but affordable Charleston dining.

Put Lana on your short list, if it isn’t already.