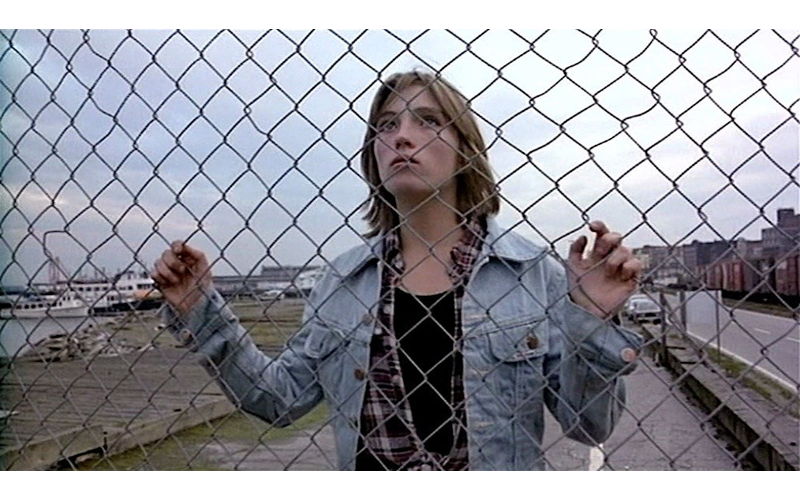 In Neil Young’s “Hey Hey, My My,” he says “there’s more to the picture than meets the eye.” That line perfectly describes Dennis Hopper’s third film, Out of the Blue. The title itself is a reference to Young’s song. The song plays intermittently throughout the 1982 film. The morose vibe of a song that Kurt Cobain would later quote in his suicide note permeates throughout.

Basically, I’m saying this isn’t the happiest movie on earth.

In fact there are moments of sheer exhaustion and unpleasantness. Safe to say it’s not for everyone. I like it but I have a large segment of friends and family I wouldn’t recommend it to sheerly because it isn’t escapism.

I first discovered this film while working at ye olde Pic-A-Flick on James Island. Nowadays the video store is better known as the Barberitos burrito joint. Anyway, my daily pursuits back then involved eating copious amounts of chalupas and gorditas washed down by super-sized cups of Mountain Dew while watching whatever movies we had on the shelf.

In between watching the Matt LeBlanc-plays-baseball-with-a-monkey movie, Ed, and direct-to-video “gems” like Bikini Summer III: South Beach Heat, I’d watch movies by directors my teachers in Trident Tech’s film program would recommend. Those directors included everyone from Stanley Kubrick to Orson Welles to John Cassavetes. Cassavetes, a pioneer of what we’d come to know as indie cinema, was already a pretty kickass actor in movies like The Dirty Dozen and Rosemary’s Baby when he decided to focus on working behind the camera. Cassavetes was who I first thought about after borrowing Out of the Blue from work. His films often involved complex, difficult characters doing inexplicable things. They felt way too real. Way too real is probably the best way to describe the characters in Out of the Blue.

A little about the movie itself: After her father, Don (Hopper), goes to jail for drunkenly crashing his truck into a school bus full of children, 15-year-old Cebe (Linda Manz) spends her free time immersed in an anti-social headspace. When she isn’t listening to Elvis or sneaking into punk shows she’s espousing her disparate views into a CB radio to total strangers.

“Subvert normality. Punk is not sexual, it’s just aggression. Destroy. Kill all hippies. I’m not talking at you, I’m talking to you. Anarchy. Disco sucks. I don’t wanna hear about you, I wanna hear from you. Pretty vacant, eh?” she rants while her mother, Kathy (Sharon Farrell) indulges in her drug addiction and ignores her daughter’s continued delinquency. Eventually, dad is released from jail. After a brief joyous family reunion where everyone dotes over each other, the old habits return and the chaos gets worse. Making the whole experience all the more wrench—ing is knowing that Cebe, for all her verbal confrontations, middle finger salutes and rebellious attire, is still a troubled young girl who goes to bed sucking her thumb. Her parents are back to immersing themselves in the world they knew before Cebe was even a thought.

I really liked this movie when I saw it back then. Every performance, particularly Manz’s, feels organic. Out of the Blue still holds up today as uncompromising — sometimes distressing — filmmaking by Hopper, whose initial rebellious oeuvre reflected his rebellious ethos, in unhinged roles like Blue Velvet and in a directing role for the influential road drama Easy Rider.

Though thematically similar, Out of the Blue never attained an audience, much less success, the way Easy Rider did since it was considered too nihilistic in the “just say no” era. Sure it was released on video in 1984 and as a long out-of-print DVD in 1999, but other than that, the movie’s presence has been minimal. It, like hordes of other films, will likely physically disappear from the public consciousness since there is only one 35mm print left in existence.

Which is where John Alan Simon and Elizabeth Karr come into the picture. About 25 days ago, their company, Discovery Productions, started a Kickstarter focused on a 4K digital restoration and 40th anniversary re-release of Out of the Blue.

From a hopeless romantic standpoint, I hope they achieve their stretch goal. It’d be great for the film to be discovered by new eyes and in its best form. From a purely selfish standpoint, I’d like for it to succeed so I could see it for myself. Nevertheless, it’s a movie that deserves more eyes than the ones who initially gave it acclaim during its brief run in the early ’80s.

If you, fair reader, would like to contribute to Discovery Productions’ quest to save the film Jack Nicholson called “a masterpiece” and Roger Ebert hailed as a “bitter unforgettable poem about alienation” please visit their Kickstarter: http://kck.st/2ZjAzNi