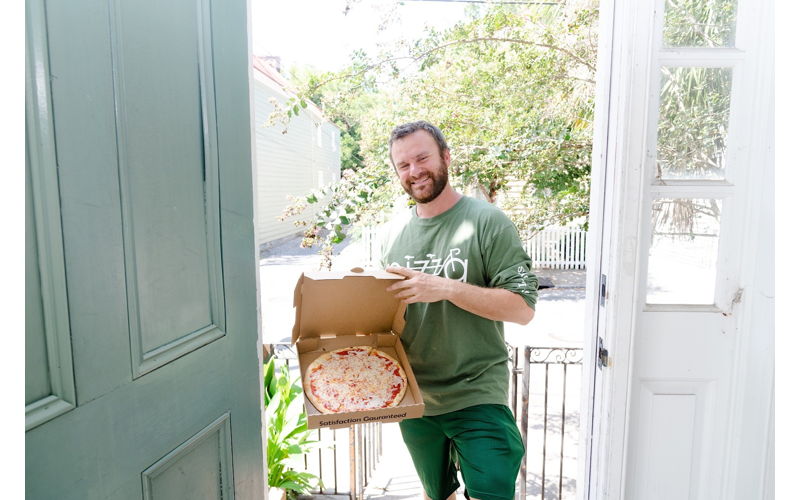 Ben D’Allesandro is putting pizzas and salads in insulated delivery bags at the pizza shop he runs with his brother, Nick, on St. Philip Street. He looks around at the other delivery drivers working that night and they divvy up responsibility for the orders. D’Allesandro takes three of the purchases and gets in the delivery truck. “There’s nothing tricky about it,” he says. “You answer the phone, make the pizza, and deliver it.”

Not to disagree with the D’Al’s founder, but he’s being humble.

He leaves the restaurant at 7:18 p.m. Before he gets in the car, or even thinks about using a GPS, D’Allesandro has planned out his route. It takes him from Hester Street to the Charleston Marriott on Lockwood Boulevard. Between the three spots, the driver hit a closed road, battled with the city’s beloved one-way streets, pushed through traffic, got out of the car multiple times, went up to the top floor of a hotel, and still arrived back at homebase by 7:50 p.m., ready to pick up more pizzas for delivery.

We’ll spare everyone the reminder that Holy City roads are a lawless black hole that we’re not escaping from any time soon. That’s one of the more average snafus found as a pizza delivery driver. “On a normal sunny day, at lunch, you have to be pretty wise and cautious with the route you take,” says D’Allesandro. “If you get on King or Meeting, you’re going to just sit in traffic the whole time. If you stay off the main arteries, it’s not too bad on a sunny day.”

But, a conversation about driving in Charleston isn’t complete without a quick rant about flooding. “Our busiest times ever are when Mother Nature is trying to put a hurtin’ on Charleston,” he says. “When it rains, it’s good for an hour or two because it’s super busy, everyone’s ordering food. But, then it gets to the point where every important intersection is flooded and you just can’t even get around.”

Since founding D’Al’s 12 years ago with Nick, the business has gotten used to the roads. D’Allesandro even says that the close proximity benefits them, compared to delivery services that are off the peninsula. “Down here, one of our drivers could take three or four or five deliveries at a time and be back in 25 minutes.”

D’Al’s has even seen firsthand the way the peninsula has changed. Sales, when they first started making food, used to drop during the summer months, but nowadays they stay consistently high throughout the year. D’Allesandro says that it’s a product of the increased tourism Charleston has seen. Surprisingly, he said they don’t deliver to dorm rooms as often as they used to.

When delivering during the day, D’Al’s is often going out to businesses, while at night, they cater to residents. “We see every type of person,” says D’Allesandro. Bankers and construction workers will often sit at adjacent tables during lunch hours he says.

Things continue to go well for the business’ delivery service. The day (and night) in the life of a food runner can be relaxed, from the early morning duties of grating cheese and cutting vegetables, but it can be hectic, like the quick drives through narrow and old roads. It seems like a balancing act that Ben D’Allesandro doesn’t mind managing.

All of Charleston’s pizza places

At Dellz on the Macon, guilt-free pies are the name of the game