A Dialogue in Black and White is a call for conversation 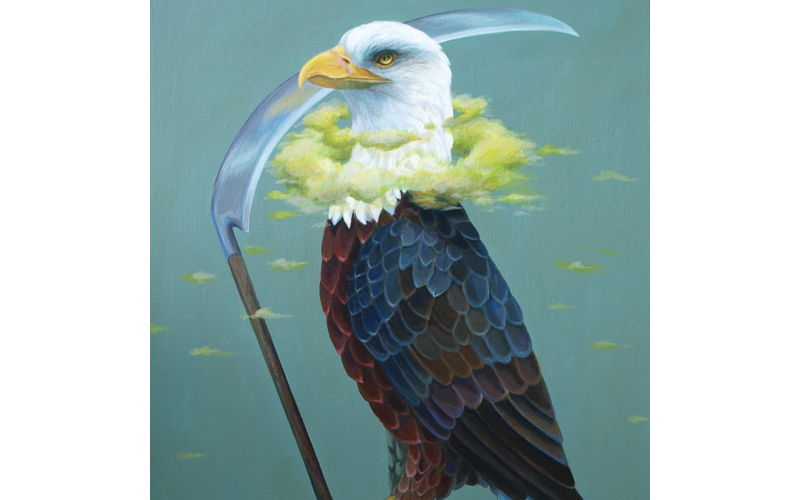 “I did encounter a young man, about eight or nine standing on the curb. First he looked at me, we exchanged glances, then his focus turned to the national guardsmen in front of him. Under those circumstances they had their rifles, bayonets, gas masks — and this kid turns and looks at them and then does this,” Karego Kofi Moyo covers his eyes with his hands. It’s a 90 degree day in Charleston and we’re sitting in the City Gallery, surrounded by unhung artwork. Moyo is remembering April 1968. He’s also describing a photograph he took, one that’s part of a new exhibition, A Dialogue in Black and White.

“And then he turned and ran, I tried to engage him but he wasn’t interested,” continues Moyo. He smiles, drops his hands to his lap. “And that’s it.” One of over 60 participating artists in City Gallery’s A Dialogue in Black and White, Moyo is a man of few words; it doesn’t matter, his photos speak loudly enough.

It’s overwhelming, then, to stand in a gallery — a perfectly sun-lit one, on a perfect May day — surrounded by works that speak for themselves. Some pieces whisper, others scream. They are all incredibly powerful. Pairs of artists were tasked with creating work based on a topic — be it rape culture or health care.

Earlier this year the show’s curator, Torreah “Cookie” Washington told me, “I’m trying to create change in a meaningful but gentle way. That’s what this show is wanting to do.” The meaningful change is apparent even before the works are hung; each artist in the show was paired with someone else, and from what I can tell, the connections and conversations among artists are only just beginning.

Kathleen Sullivan says that meeting and sitting with her partner, Kelvin Bluffton, had a huge impact on her. The two shared the topic, Black Lives Matter, and Sullivan says that Bluffton’s stories of his Gullah upbringing were eye-opening. “He was an international security guy and Charleston police officer,” says Sullivan. “He was amazing to me. He’s such a wealth of knowledge. I hope I can continue the conversation, because I really learned a lot from him.”

Participating artist Arianne King Comer learned a lot from her partner, too. “It took me a long time to come up with it,” says Comer of finding inspiration for her Dialogue in Black and White piece, based on the topic of homelessness. “I didn’t feel it. What got me, was to meet with my partner. I had met him, a couple years ago as a docent for an exhibition. I was glad that I knew him, but had no idea that he was homeless until this project. Our dialogue was trying to reach him; he’s homeless, he doesn’t have a phone. It was intriguing to me, to think of him all the time.”

You can tell that each artist in A Dialogue in Black and White has thought, often, of their topics — that the ambition and sheer force of this project is astounding. Artist Hank Herring is quick to admit that his topic, cultural appropriation, is “a tough subject.” “There are two sides to the topic. Because of the internet and so many people traveling, there’s a fine line,” says Herring. “You pick up someone’s culture and think you can make money. That’s different than studying in the culture and creating work in appreciation of it.” Herring, who was in the military for 20 years, and has travelled all over the world, says that his work — for A Dialogue in Black and White he created a wood carving of an African mask sitting atop a West African symbol — can never be totally original. Inevitably, he’s picked up aspects of art from others.

Herring sees, too, cultural appropriation as more than one piece of art in an exhibit — he sees it in his own culture. “I’m finding that [appropriation] with Gullah art in the area,” says Herring. “The culture was almost talked out of their work and their language and now it’s a commodity, a tourist attraction. All these entities are trying to make money off of it.”

Money. Race. Class. Gender. The divides of the world are the catalyst for conversations — both the obvious, and the layered. Carolyn Thiedke, a family medicine specialist at MUSC, was tasked with creating a work of art based on the topic of racism. Given that broad definition, Thiedke decided to connect her work with what she knows. “What we’ve learned is that even for well-educated African-American women, they continue to have higher rates of complications during pregnancy,” says Thiedke. Her piece is a white quilt, delicately speckled with tie-dyed color. The center image is a small black baby, a preemie in the NICU. The piece is called “Racism’s Collateral Damage.”

How often do we take what we have for granted? From the preemie in the NICU to a retired woman’s need for health care, it’s all covered in A Dialogue in Black and White. Artist Cheryl Johnson tells me that at first she had no idea how she would depict her topic of health care — “Who wants to look at a painting of that?” But then, she realized that she was actively living the questions of her topic; having just retired from a job where she’d always had health care, Johnson suddenly found herself uninsured, looking up coverage at healthcare.gov. “What a nightmare,” says Johnson of her lack of insurance. “It’s awful. I started getting more and more frustrated and that frustration led to me thinking, ‘How do people deal with this?'”

Artist Lisa Shimko also asked, ‘How do people deal with this?’, for her piece, based on the topic of the death penalty. “It’s a complete 180 from any theme I’d pick,” says Shimko, who is best known for using animals as the subjects in her self-described “happier” paintings. “The first thing that came to mind was capital punishment — but I also thought about what we’re doing to the planet. Our death penalty is what’s happening, it’s what we’re doing to ourselves.”

Like all of the topics in A Dialogue in Black and White, the death penalty is, as Shimko says, “a lot to wrap your head around.” “I thought of capital punishment — it’s part of our humanity. But is it really human, or humane?”

A Dialogue in Black and White will be on display throughout Piccolo Spoleto at the City Gallery. To fully immerse yourself in the experience, we recommend buying a ticket to one of four dinners, featuring artists and guests speaking about the topics on the walls around them. Dinners take place on Thurs. May 24, May 31, and June 7, and Sun. June 10 (brunch). Tickets are $50 and can be purchased online at citypapertickets.com.