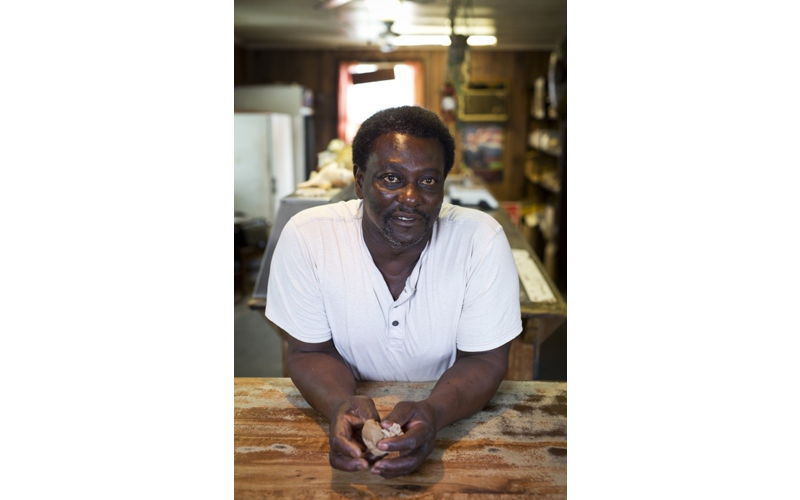 The Value of Guts

Last month I introduced a chef from Denmark (the country) to the briny nuances of pickled pig’s feet. We found them in all their day-glo pink glory in a dusty jug that Junior Backman dipped into while preparing a morning feast of spicy steamed crabs at his eponymous fish shack on Sol Legare. Chef Paul Cunningham was not overly impressed with their gelatinous tang. He didn’t down them with gusto like half my people from Barnwell or Denmark (the country town) might — that half predominantly formed of African Americans. He instead noted his own way of preparing pig’s feet stuffed with sweetbreads, sautéed and braised. But he sourced a couple jars and chopped them into a compound lard, featuring them alongside herbed sourdough that headlined the Grand Gelinaz! Shuffle dinner at McCrady’s. Tickets were $150, and diners dressed to the nines. Patrons raved about the bread and the butter. And the black folk liked it too. They were washing dishes back in the kitchen.

In my work as a professional critic, I’ve primarily learned that pointing out such observations takes guts.

It is our nature to repress the more troubling aspects of life. We render them unconscious and unavailable to ready examination, soothing anxieties while rarely addressing the underlying maladies that remain in wait, ready to surface when the stars align. The good people of Charleston, perhaps even more than the rest of the gentile South, do not prefer the hard task of self-examination. We are not a haven for introspective artists nor overt rabble-rousers. While Ferguson fumed and Baltimore burned with rage, we absorbed the police murder of Walter Scott and the supremacist massacre of the Emanuel Nine with solidarity and love. This will be commendable only if it lasts.

That also will take guts, requiring a civic reevaluation that goes far beyond hand-holding in the face of tragedy. No one relishes an uncovering that reveals a collective culture steeped in structural racism, but that we are. We will not atone for the dreadful legacies of our “heritage” by replacing the names of those who perpetrated them. Because this city was not truly built by the white men whose names line its streets, yet the names of those gunned down at Emanuel are familiar to anyone who visits: Pinckney, Middleton, Singleton, Simmons. Charleston is a city built by slaves.

A few months ago, local leaders in the academic and culinary communities came together to reenact the Nat Fuller Feast, a dinner of reconciliation originally staged by a prominent caterer on the eve of Reconstruction. With the cocktail reception commencing, a troop of 54th Massachusetts reenactors broke into spirituals. The words were revealing, as were the uneasy glances of white folk faced with a single-clap, foot-stomping gospel celebration in the midst of black ties and champagne.

“I’m gonna sit at the welcome table … I’m gonna feast on milk and honey … I’m a tell God how you treat me one of these days,” they rang out.

Pig’s feet and intestines are really no more obtuse than raw oysters and cookery books of the 19th century reserve plenty of space for the treatment of offal. They had guts.

We marched to McCrady’s beneath the American flag and sat together, black and white, enjoying recipes that Fuller might have prepared at the original feast. And while Fuller was a former slave, he prepared food in the “popular style of the day.” This meant French methods inflected with local flavor, brioche with foie gras mousse, chicken and truffle pies, turtle soup, collard kraut, shrimp pie, and watermelon pickles. I wondered what Nat Fuller ate the night after the original feast and the night after that. What was his “milk and honey” when he wasn’t catering to the wealthy elite of Charleston and the foreign tastes of their exclusive white “societies?” How might the welcome table appear if no hierarchy skewed it toward the proclivities of those who enjoyed social and political prestige?

We can guess at the common tables of post-bellum Charleston even though the historical record proves sparse. We can bet against duck liver and the wild game imports that Fuller made his name on and assume that most freemen ate the way average whites did. If we ride to North Charleston, the Eastside, Sol Legare, or Nana’s Seafood on Line Street, we can still find purveyors of those legacies, dishing up foods that have all but vanished from Charleston’s white tables. Pig’s feet and intestines are really no more obtuse than raw oysters, and the cookbooks of the 19th century reserve plenty of space for the treatment of offal. They had guts.

The edibles of “others” were not so divergent in those days. There is always a tendency, mostly by those who feign superiority through consumption, to display their pretension in conspicuous fashion. But people largely ate from the same larder, the choicest bits going to the better heeled, as they do today. Even the dreaded Indian corn — once a symbol of Native American people’s alleged sloth, backwardness, and savagery — made itself a revered part of the Lowcountry table by the time slavery fell. What would we be without grits and hominy?

The distinctive cuisine of the Lowcountry is not reflected in Nat Fuller’s fanciful orchestrations of culinary skill, as delicious as they might be. Lowcountry cuisine is primarily a legacy of West Africa, seasoned in the Caribbean and sprinkled with the influence of countless ethnicities — Jews, Germans, French, Irish, Italians, and, yes, even a few proper Englishmen. Who does not thank God that the cookery of the “mother country” did not predominate here?

The divergence of “white” and “black” foods in the Lowcountry derives from more derisive separation. And by the same measure, the Gullah Geechee embody the living record of that legacy. First through suppression and slavery, then through segregation and ostracization, the black peoples of the South, and the Lowcountry in particular, were largely encapsulated in socioeconomic isolation. Impoverished, denied access to capital, unable to own property in areas reserved for whites, prevented from attaining equitable educational opportunities, and generally held forth as inferior by the prevailing white culture, blacks lived in a separate world — as anyone of middle age who grew up here can honestly attest. In most white minds poverty constituted sloth, the uneducated were childish and wild, muscled laborer full of sexual lust. We didn’t swim together, we didn’t court each other, we didn’t invite each other to holiday gatherings, or church, or sleepovers, or Sunday dinner. In many instances, those things still hold true.

You could define the Gullah Geechee by these terms, but such segregation provided an avenue for preservation. The Gullah cuisine faithfully renders the essence of a creolized Atlantic world because Charleston welcomed an estimated 40 percent of the slaves imported to North America. Until the northward migrations of African Americans in the early 20th century, South Carolina contained a black majority, ruled by an economic elite composed mostly of whites. And while the culture of Charleston has shifted drastically, racially isolated portions contain a preserved culture.

A difficult question lies in how, or even if, the Gullah culture can be retained. Certainly, a decline of poverty that defines many African-Americans’ lives would be a welcome change, but too often the path to economic freedom means selling off the communities themselves, ripping apart the fabric of historic neighborhoods. Once splendid establishments like Alice’s Fine Foods, Latasha’s Taste of New Orleans, and Ernie’s Restaurant have fallen to the “beautification” efforts of the Cannon/Spring corridor and Upper King. In their place now reside businesses designed to attract a much different clientele than the Martin Luther King Jr. Memorial District originally contained. The old stalwart Martha Lou’s survives largely through the efforts of food writers and celebrity chefs’ recognition and promotion. Others have moved north or simply vanished along with their clientele. And in this shift we see that Gullah cooks give way to a kitchen full of chef’s whites. Duck behind the doors of most dining establishments in the “better” parts of town and you’ll see a stark divide between those preparing the food and the folks hired to clean it up.

I think it foolish to believe that many Gullah communities will remain isolated and intact in the face of continuing development. The economic forces of gentrification preclude that in the long term. To preserve the culinary traditions of Gullah culture we will need to fully admit African Americans into the local culinary culture and with it embrace foods and traditions that segregation teaches are undesirable. We will need more programs like Mickey Bakst’s Teach the Need preparing local high school students for careers in restaurant service. We will need chefs of color who bring the neckbones, who place the tripe and chittlins in the realm of white tablecloths, and don’t tip toe around liver pudding and smoked mullet. We will need people who push beyond fried chicken and pickled watermelon, dishwashers taught the garde manger. It can be done. We need people with guts.

When it comes to finding Gullah cuisine, the search can be perplexing. The entrepôt for the African slave trade, Charleston sits in the center of the Gullah Geechee Corridor — an area spanning from Wilmington, N.C. to Jacksonville, Fla.