A Brief History of the Boiled Peanut 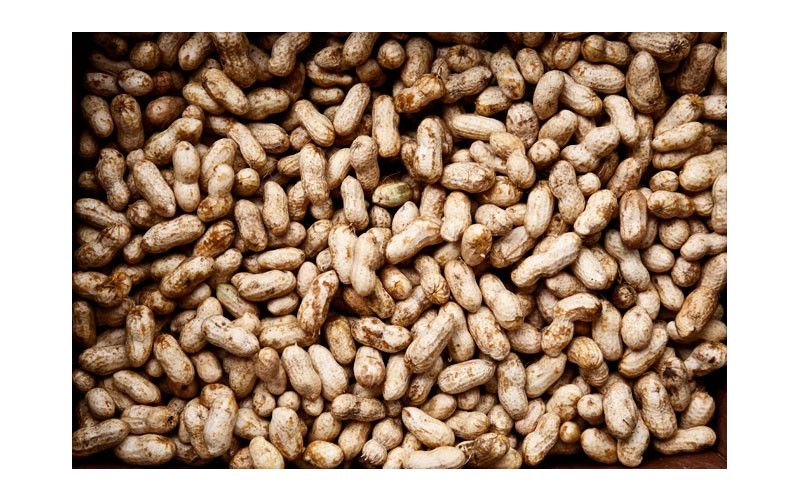 The story of the shell

Though boiled peanuts are now enjoyed throughout a broad swath of the South, their roots run deepest right here in South Carolina.

They arrived in the Lowcountry via a circuitous route. The plant originated in South America, and the Portuguese took it to Africa around 1500, just after they first came into contact with it in Brazil.

The legume spread quickly across Africa, becoming so widely used that early botanists believed the plant must have originated there. The peanut was very similar to the indigenous African groundnut, a staple of the local diet, and thanks to its higher oil content and easier cultivation it soon eclipsed its indigenous counterpart.

Peanuts arrived in the South sometime in the 18th century on slave ships, which were frequently provisioned with them for the voyage. In his 1809 history of South Carolina, David Ramsay noted that peanuts were “planted in small patches chiefly by the negroes for market” and sold for five shillings per bushel. During this period, they were widely referred to as ground-nuts, ground peas, and goobers, a term derived from the Angolan word ginguba.

As with other African culinary staples like okra and black-eyed peas, peanuts eventually became part of the diets of white Carolinians, too. Sarah Rutledge’s 1847 Carolina Housewife includes a recipe for a soup of mashed groundnuts with oysters and a “seed-pepper or two” as well as a “cheese cake” that starts with a pound of blanched and finely-beaten groundnuts along with plenty of eggs, sugar, and butter.

Numerous accounts have claimed that the practice of boiling peanuts began with Confederate soldiers during the Civil War. Desperately hungry and cut off from food supplies, the tale goes, soldiers took to digging up raw peanuts and boiling them. They took a liking to the improvisation and kept eating them after the war was over.

Peanuts had been eaten boiled for centuries in Africa, and it seems to have been a common way of preparing them in antebellum South Carolina when they were green and fresh out of the ground. W. H. Shelton, a Union soldier who was captured in 1864, escaped from a prison camp in Columbia. As he made his way eastward toward Charleston, he was given food by some of the African-American residents he encountered. In his account of his escape, he noted that he was provided on multiple occasions “boiled peanuts, which was a favorite way of cooking when the bean was too green to bake.”

During the second half of the 19th century, peanuts became one of the country’s most popular snack foods, but in the roasted, not boiled, form. In Northern cities, roasted peanuts were eaten in theaters, at circuses, on trains, and at baseball games. By World War I, peanuts had become a popular ingredient, too, being incorporated into salads, baked into cakes, and folded into an array of candies. But eating them boiled seems to have been confined to just a limited part of the Carolinas.

Around the turn of the 20th century, boiled peanuts began popping up in a curious spot: on the society pages of South Carolina newspapers.

In 1903, when the Society of Civic Improvement in Manning held an old-fashioned corn shucking, the refreshments served included gingerbread, root beer, and boiled peanuts. They appear to have been quite the fashionable thing to serve at weddings and parties not in the larger cities of Charleston and Columbia but rather in the smaller towns that dotted the countryside — St. Matthews, Olanta, Lynchburg, and Cameron — always in the months of August and September, when fresh green peanuts had just been harvested.

From there, boiled peanuts spread southward. By 1913, they had arrived in Macon, Ga., and five years later they were being served at a range of social functions in Tampa, Fla.

Curiously, one part of the South that was slow to adopt the boiled peanut was the largest peanut-producing state. In 1917, a writer for the Richmond Times Dispatch recalled that when he mentioned boiled peanuts at a meeting of peanut growers in Suffolk, Va., the farmers reacted with incredulity, having never heard of such a thing. “About all I could say in reply,” he wrote, “was that if these same farmers would go to Charleston, Savannah, Jacksonville, Tampa, or New Orleans at this season of the year they would probably find that at the fruit and peanut stands the most popular seller of all would be these same boiled peanuts.”

By the 1920s, the popularity of the boiled peanut was such that they started getting attention from bemused Yankees. In September 1925, at the height of green peanut season, a Universal wire service report datelined Orangeburg, S.C., profiled “peanut boilings,” which surmised its readers had never heard of “unless you have visited the ‘goober’ sections of the Carolinas.

“As soon as peanuts begin to ripen,” the article continued, “and before they are dried, washpots are filled with peanuts and salt water, fires are lit, and when the guests arrive the delicacy is boiling merrily. The boiled peanuts are ladled hot from the pot and served to the merrymakers.”

Across the lower part of South Carolina, each community had its top peanut cooker. In Barnwell during the 1930s, George James, an African-American farmer, was recognized as the “king of the boilers.” James, the Augusta Chronicle noted in 1939, had mastered “the art of boiling properly with just enough salt in the water to add that unexplainable twang which makes every peanut something to linger over and enjoy.”

South Carolinians have been lingering over and enjoying their boiled peanuts ever since. In 2006, the state legislature declared them South Carolina’s official snack food. The goober sections of the state must wield considerable power, for no legislator had the temerity to stand up for pork rinds or benne wafers. Boiled peanuts were voted in by unanimous consent.

Charleston purveyors and chefs prepare for a forecasted shrimp shortage