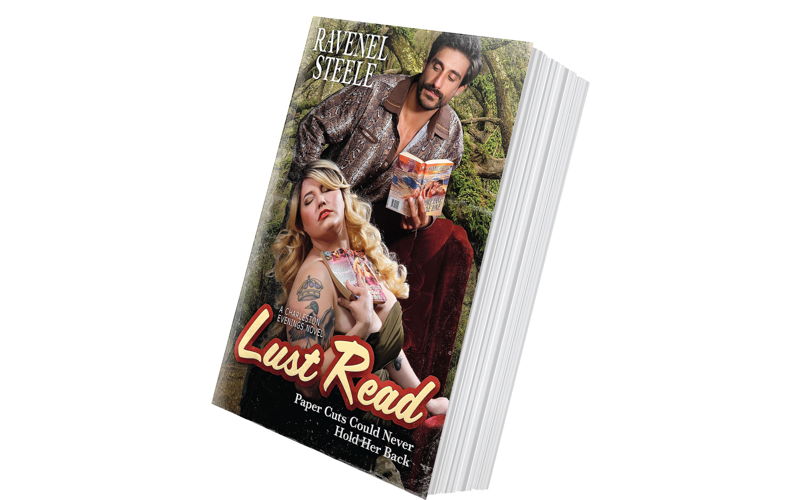 Synopsis Angel wondered if her story with Saunders was just beginning… or ending. He’d seemed so distant lately, caught up in, you know, books. Angel couldn’t understand — were words on a page more interesting than her words of love?

And then, one day, Saunders sauntered in, as he was wont to do. “Angel, my love, I have a gift for you.” Angel, demure as ever, reached for his hand and took what he offered — a book, a story. Their story.

“Oh Saunders!” she cried, knowing that the novella would be so fucking perfect for her beach trip that afternoon. “How ever did you know?”

His knowing smile told her everything.

There’s nothing like kicking back in the sand with a nice page-turner about shark attacks, sci-fi motorcycle gangs, and sad recollections from other people’s time at the beach. That’s why we’ve gathered a few recommended reads to enjoy while you catch a few rays.

Former contributor to Skirt! magazine and graduate of Columbia College, Ann Kidd Taylor’s first fiction novel tells the story of one fateful summer back in 1988 when 12-year-old Maeve Donnelly receives her first kiss from the boy of her dreams and gets attacked by a shark in the Gulf of Mexico. Skipping ahead 18 years, Donnelly has dedicated herself to a career as a marine biologist. Although well respected in her field, Donnelly is unsure about her choices in life, until she finds herself back in her childhood home. While there, she uncovers an illegal shark-finning operation that has resulted in the deaths of hundreds of sea creatures. Torn between addressing the troubles in her personal life or completely losing herself in her career, Donnelly must choose which path to take — all while trying to protect the creatures of the sea.

In his first book since completing his three-part series on complete world knowledge and fake facts, John Hodgman returns to the page with a humorous, yet sincere look at his time spent on the beaches of Maine and his trek through middle age. Most may remember Hodgman from his appearances on The Daily Show or the Judge John Hodgman Podcast, but his writing is probably what’s most deserving of praise. With a dry wit and ample amounts of self-depreciation, Hodgman offers a humorous take on adulthood and the harsh, unforgiving beaches of eastern Maine.

Written by California Academy of Sciences research associate Dr. Wallace J. Nichols, Blue Mind comes with the subtitle The Surprising Science That Shows How Being Near, In, On, or Under Water Can Make You Happier, Healthier, More Connected, and Better at What You Do. The incredibly lengthy title aside, Blue Mind details the mental and physical benefits of being near the sea. Earlier this year, Wallace was invited to speak at the South Carolina Aquarium’s Holland Lifelong Learning series to discuss the research and findings that went into his nonfiction book that delves into the calming effects of the sea. At the very least, Blue Mind will offer up a few more excuses for why you spend all your time at the beach.

Collecting the first five issues of the celebrated comic from the creative team that rejuvenated DC Comic’s Batgirl series, Motor Crush features the work from Mt. Pleasant’s very own Babs Tarr. Tarr brings her trademark high-energy, high-fashion art style to this story of motorcycle racers who do battle with rival gangs all in search of the fabled “engine-boosting machine narcotic known as Crush.” It’s a fun, fast-paced read that will also make you look like the coolest kid on the beach — and it’s arriving just in time for summer.

For all you history buffs out there, Paul Starobin’s Madness Rules the Hour offers a deep dive into 1860s Charleston. On the cusp of civil war, Starobin outlines the propaganda, politics, and economic factors that led to South Carolina’s decision to withdraw from the Union and wage a violent failed revolution. Providing detailed portraits of the city’s elites and their push for rebellion, the New York Times called Madness Rules the Hour a “fast-paced, engagingly written account of the hysteria that descended on lovely Charleston — where the unthinkable became the inevitable — is as much a study in group psychology as it is in history.”