2nd Nosh Mob at Fish was a big success 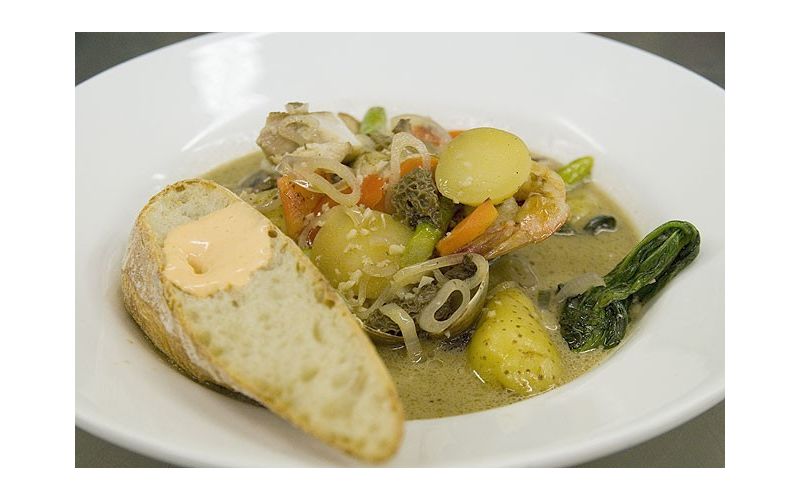 At the second City Paper Nosh Mob event, Chef Nico Romo invited attendees into his kitchen at Fish and gave everyone a glimpse at what goes on behind the scenes, including a look at the big, burly fish on ice in the cooler. After giving a quick run-down of the inner workings of the restaurant’s kitchen — including introductions to the core staff -— Romo took us to the spacious catering kitchen for a demonstration and some useful information on how to tell if a fish is fresh. He suggests buying fish whole, because the gills are a clear indicator of its freshness. Red and bloody means recently caught. The bass he took his knife to had been brought in earlier that day by local fisherman Mark Marhefka (whose name sounds a little like a curse word when spoken by the French-accented Romo), and its gills were bright red. The chef made quick work of filleting the fish with his super-sharp sushi knife, and then moved on to create a bouillabaisse, handing out recipe cards for Nosh Mobbers to try later at home. The aroma of the stew filled the kitchen and we all hoped for a fat spoonful, but instead we were offered a bigger reward for returning to the bar at Fish: dim sum samples and cocktails.

Restaurant Manager Evan Powell mixed up a citrusy Oolong Express, a vodka cocktail with Canton ginger, fresh orange, housemade oolong tea syrup, and Grand Marnier. As he shared his recipe and mixed a batch of drinks, platters of duck confit steamed buns and other nibbles paraded out of the kitchen. It was a nice end to the evening, and the collected Nosh Mobbers dispersed into the night. Some to other events in town, and others into the dining room to partake of the three-course Mercy of the Chef menu, which was created with us in mind. The $25 dinner started with a duck confit croquette, moved on to a rich seafood stew with dumplings, and finished with a perfectly seared red porgy served with a curry sauce. I left the night convinced that Fish is the best place in town to get the fresh local catch, because it truly is fresh and local. And Mercy of the Chef dinner is a great deal. The wine pairing is only $5 extra and gets you a 2-oz. pour of three wines. Thanks to Fish for the hospitality and congrats to Betty Gene Haller who won a $100 gift certificate to the restaurant.