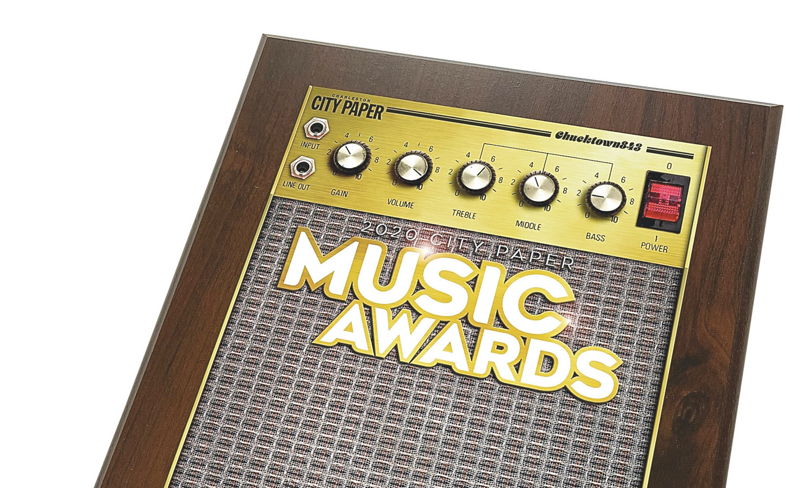 It’s been a tough year. The city’s live music scene shut down, artists held off releasing work, tours were canceled and the truth that we’re all still struggling with representation for Black artists is more apparent than ever. At the end of the day, this year’s City Paper Music Awards might be more about honoring the musicians that carried on and marched forward despite everything.

This year brought new releases from heavy hitters in the scene like Abstract that Rapper, Niecy Blues and LOBG. Newer faces like Baby Yaga and R Dotta had attention-grabbing work, promising plenty of positive things for the future. Plus, artists Mike Brown and ZachontheTrack got some national attention thanks, in part, to their tireless hustle and continuous stream of new work.

As you’ll notice, several categories and our annual City Paper Music Awards winners showcase concert were nixed this year due to the pandemic. We hope to see both return in 2021. Until then, head back to a local music venue as you feel safe, and keep an eye out for our livestreamed “2020 Sucks” concert on social media in the coming weeks. —Heath Ellison

Hip-Hop Act of the Year
Abstract that Rapper

Metal Band of the Year
Fire and Flood

DJ of the Year
DJ Scrib

Singer-Songwriter of the Year
Niecy Blues

Producer/Studio of the Year
ZachOnTheTrack

Artist of the Year
Slim S.O.U.L.

Electronic/Experimental Artist of the Year
Contour

Music Video of the Year
“No More Tears” LOBG (shot by Stanley Green, produced by ZachOnTheTrack)

Bassist of the Year: Justin Harper

Soul/R&B Band of the Year: Ben Fagan and the Holy City Hooligans and Percussionist of the Year: Quentin Ravenel

Reggae Band of the Year: The Dubplates

Music Video of the Year: Mary Ann and One-Eyed Dan, Shovels and Rope

Guitarist of the Year: Mike Sivilli

Singer-Songwriter of the Year: Johnny Delaware

King and Queen of the Last Minute

All in the Family

DJ Rehab discusses the chirp, beat juggling, and Songs in the Key of Me

Charleston’s Savage Souls live and breathe the music they create

The Doctors Are In

Passion fuels the road ahead for The Travelin’ Kine

Ryan Bonner blazes through new LP in the backwoods

From the back pew to the world stage, Quentin Baxter keeps the beat

Rachel Kate spreads the love and shares the hate

From the back pew to the world stage, Quentin Baxter keeps the beat

The sudden and surprising success of the Dead 27s

Rising from the Grave

This is Your Brain on Hugs

The Local Honeys play it sweet and old-timey

Win a CPMA and get a Patch Whisky original

The Ballad of Michael & Cary Ann

The Shovels & Rope duo find love, adventure, and fleeting fortune on the road

Bully Pulpit is not a heavy metal band

The Flat Foot Floozies tap their way into your hearts

Horn player of the year

DJ/turntablist/electronic artist of the year

The winners of the 2011 City Paper Music Awards

Metal/Punk Band of the Year

Elise Testone and the Freeloaders

Funk/Soul/R&B Artist of the Year

Old You and Firework Show

Hip-hop artist of the year

Bassist of the year